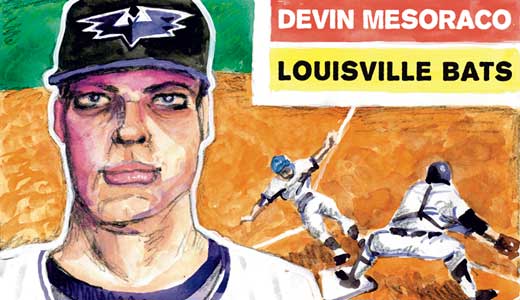 The runner is going!

The pitch comes to the plate.

The catcher gloves the ball and whistles a strike to second … Out!

Seems like there’s a lot of that going on around here this summer. Louisville Bats catcher Devin Mesoraco is the new sheriff in town — and he’s busy bringing would-be base-stealers to justice. Halfway through his first full season with the Bats, Mesoraco has thrown out 17 runners, picked several more off base and tagged a pile out at the plate — generally cleaning up the mean streets at Slugger Field.

There’s a runner sneaking off second base and Mesoraco sees him. The catcher flashes a sign to the infield that a play is on, and on the next pitch, Mesoraco suddenly fires a throw to second. The base runner — one pities the fool — realizes his predicament and scrambles to get back safely to the bag.

But it’s too late. He’s picked off.

“He was just a little too far out there,” Mesoraco explains later. “I’d seen a couple pitches before where he was getting off the bag pretty good. Gave the sign to the shortstop and we made a good play. Got him easy.”

And it’s not even Mesoraco’s favorite. That’s the play at the plate.

The runner is coming all out for home, and the Bats fielders put extra steam on their throws to cut him down.

Then, it’s up to Mesoraco.

“The plays at the plate are my favorite plays in the game,” says the 23-year-old Pennsylvania native. “A lot of games are decided on whether the catcher can pick the ball and block the plate.”

Of course, not getting knocked out of the game while blocking the plate is the tricky part.

“I think it’s almost a simultaneous thing, where you’re catching the ball and blocking the plate at the same time,” Mesoraco says. “As the runner is coming in, I make sure he can see some of the plate. And as the ball arrives, I’ll just take a little jab step and try to block him off a little bit.”

Mesoraco acknowledges there are certain players who will take a shot at a catcher.

“You usually know which guys those are, the ones that want to try and run you over,” he says. “Usually if you have the ball waiting there, the guy is out. It’s just a matter of not trying to be a hero. Just fall down and wear it.”

“Not everyone can be a catcher,” explains Louisville manager Rick Sweet, a catcher himself in his playing days. “When you take a hard play at home plate, or something bangs off your foot, everybody goes, ‘Ah jeez, why do you do that?’ But as a catcher, you just kind of smile, and it’s part of your job and you appreciate that part of it.”

Of course, every catcher who straps on a mask and shin guards endures the rigors of the position. What makes Mesoraco different is his potential. He was Cincinnati’s No. 1 draft choice in 2007 out of Punxsutawney (Pa.) Area High School. Last year, he scooted up the Reds’ minor league ladder from Single A Lynchburg, Va., to Double A Carolina, to end the season with Triple A Louisville. In his first game here, Mesoraco hit a grand slam. The next day, in his very next at-bat, he hit another.

Mesoraco’s throwing is especially interesting. It’s not about having a “cannon.” He’s just good at it. Most of the time his throws come in on a rifle line just above the bag. Right there. The runner practically tags himself out.

Reds scout Jeff Brookens, who signed Mesoraco, says the catcher came to professional baseball with all the tools, but less innings played — due to weather.

“Coming from the Northeast, it’s different than coming from the warm-weather states, where the kids play nearly year-round,” Brookens says. “The kids from Florida and Texas and California are generally more polished. Up in Pennsylvania, you’ve got to shovel snow just to throw a little.”

But Mesoraco catches on quickly.

“I thought for the period of time I managed him at Lynchburg, every night he was the best player on the field,” says Pat Kelly, now the manager of the Reds rookie league team at Billings, Mont., and the Reds’ system-wide catching coach. “Whether it was defensively behind the plate, or running the bases, he dominated every game.”

Now, his coaches say, what Mesoraco needs most is experience.

“He’s at Triple A right now with Rick Sweet, learning how to call a game,” Kelly says. “How to mix the pitches and set up hitters. He’s also got Corky Miller (an excellent veteran catcher) there in Louisville, as a kind of mentor.”

At the All-Star break last week, Mesoraco had nine home runs and an International League-leading 30 doubles. Brookens says that ratio may change.

“Being baseball people, sometimes we’re a little superstitious about saying this, but with as many doubles as he has, it’ll translate to some home runs when he reaches the big league level,” Brookens says. “He has strength in his swing, and he squares the ball up. As long as he stays ‘within himself’ he’s got the strength to hit it out of any ballpark.”

Just when Mesoraco will be called to the majors is the subject of much fan chatter — both here and in Cincinnati. The Reds have two good catchers now, but could make roster moves before the July 31 trading deadline. The club also has another top catching prospect at Carolina — Yasmani Grandal, a switch-hitter who was an All-American at the University of Miami.

Most observers feel the Reds will be careful to fully “season” a top prospect like Mesoraco before promoting him. But whatever happens, the catcher is likely to retain his confidence.

“He’s a special cat,” Brookens says. “He takes everything in stride. A great work ethic — with aptitude. The way he is, you might say, is Devin being Devin.”

“I can remember a lot of times at Lynchburg, a lot of guys would be resting between innings, but he’d be up on the top step of the dugout cheering on his teammates. I think that’s a very special quality in a player — to be a good teammate.”

With the Bats, Mesoraco is still a top step kind of player — in the dugout, and behind the plate.

“I enjoy it back there,” Mesoraco says. “The mental side of the game, especially. It’s something I wouldn’t change for anything — and where I want to be for the rest of my career.”