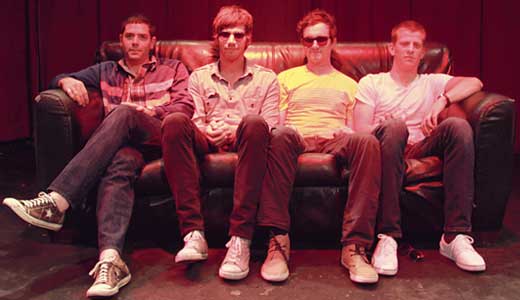 The first show that Cory Wayne, Stuart Phelps and Chris Snow ever played together was dysfunctional. The three were clad in costumes — Cory as a bee, Stuart as a bunny, Chris as a lobster. Their drummer sounded like a “dead watch,” and Chris accidentally kicked off the power during their first song. It didn’t seem to be an auspicious beginning.

They’ve come a long way since then.

Along with Zack O’Renick, the Louisville natives now comprise Nerves Junior, a self-described experimental pop band. “That gets a nasty face from most people, pop music,” Cory says. “Around here, it’s like all folk or heavy metal.”

In a city running low on pop, however, Nerves Junior is carving a niche. While they sample electronic beats, that’s not the main focus of the music. It’s simply one of many elements, blending with raw guitar, steady drums and melodic vocals to create a fluid, catchy sound — a sound that’s the product of trial and error.

Brothers Cory and Stuart met Chris through a mutual friend. After a summer-long friendship, Chris moved to Colorado, but not before Cory informed him that the three of them were going to start a band when Chris came back. Roughly three years ago, they did just that. They dubbed themselves Wayne Gretzky and set off, using everything at their disposal. “From day one, we had songs filled with as much weird shit as we could put in them,” Chris says.

Wayne Gretzky evolved into a short-lived second band that the guys don’t like to discuss, but they will say its long, dull songs taught them something for their next project: “We had a rule when we started writing songs for our new band,” Chris says. “If you lit a cigarette, and it was still going when the song was over, then the song was too long.”

Off to a steady start, the three members of Nerves Junior met Zack through a mutual friend and, in need of a drummer, they gave him a try. While Zack’s drumming was what Cory calls “unflappable,” what really confirmed his place in the band was his personality. The guys agree that no matter what a person can do musically, what makes Nerves Junior a band is the chemistry among its members.

“The thing about friends is that they almost know what you’re thinking,” Cory says. He describes times when he’s written music or lyrics because he knows another band member will like it, or when he’s played random notes and the other guys have immediately grasped what he’s trying to do.

The formula is working. Nerves Junior is preparing for an end-of-summer tour and just finished recording a new album set to drop in the fall (a Sept. 2 release party is in the works). The guys agree that things are only coming together so well due to their camaraderie.

“It’s good to be friends so you still have a band the next day,” Zack says. “Musicianship doesn’t really exist outside of that.”