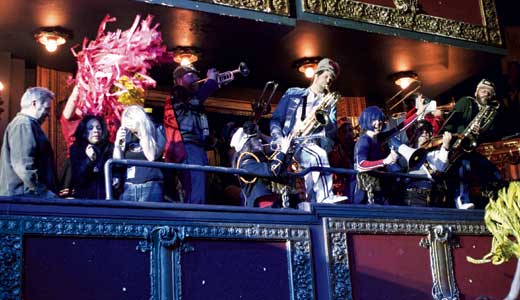 It’s safe to say you haven’t seen many bands like Chicago’s Mucca Pazza. Their two-dozen or so members play a circus-like mix of marching band, jazz, modern classical and avant-garde music with a punky attitude and an every-night-is-New-Year’s-Eve mission. LEO spoke with members Jeff Thomas (guitar) and Gary Kalar (mandolin).

LEO: How did this evolve from an idea to reality?
Jeff Thomas: Well, we thought That was a really good idea, and it turned out to be a GREAT idea. So, we tried That, and This became a reality. Thus the idea of That is how This became a reality. That made us happy, but This makes us really, really happy. So we stopped thinking about That, and decided to start doing This.
Gary Kalar: Alcohol.

LEO: How do you describe the Mucca Pazza experience to those who haven’t witnessed it yet?
JT: I think the news anchor on Louisville’s WLKY broadcast of the 2008 Pegasus Parade described us best with: “And … here is Chicago’s own circus punk marching band Mucca … um … uh … I don’t think we have seen anything like this before.” If you can’t trust a local news anchor for an honest description, then who can you trust? Incidentally, we haven’t been able to find a copy of this broadcast. Can you find a copy for us? I’ll buy you some ice cream.
GK: A marching band that doesn’t play marches. An audio-visual explosion of wacky joy, silly fear and odor. Yes, that is audio-visual odor.

LEO: How challenging is it for you to blend marching band, circus, rock, classical and other music cohesively?
JT: Not as challenging as getting an audience to dance to a car alarm.
GK: As long as you don’t think about it much, it’s easy. It helps to listen to really good DJs.

LEO: You’ve played some successful shows in Louisville — a set at the Forecastle Festival, a Derby Eve show with Wax Fang. What’s your impressions of Louisville overall, and of our music here?
JT: Inspiring.
GK: For every reason we find Brooklyn disgusting, we find Louisville delightful. Open, down-to-earth, ready to have fun for no reason. And the food is awesome.

LEO: How many members can we expect in Louisville (including cheerleaders)?
JT: Too many for the stage. Unfortunately, some of us will have to play in the audience. Important safety information: Wear protective eyeglasses, earplugs and, most importantly, nose plugs. Mucca Pazza is not responsible for broken or damaged senses.
GK: Anywhere from 20 to 25.

LEO: Have you thought about starting other chapters of Mucca Pazza in other cities, especially as touring is difficult?
JT: See previous answer to question of ideas and realities: This is That.
GK: We hope every city has lots of their own freak marching bands. It used to be normal. Marching bands, I mean. If your city doesn’t have a marching band, start one today! You don’t need horns or drums either, just find a way to make what you play mobile. Bolt some speakers to football shoulder pads and start shredding. Find everyone you know who plays the flute and start an all-flute marching band. Ok, don’t do that. But things like that.

LEO: Your name means “crazy cow” in Italian. We have an ice cream parlor here called The Comfy Cow. I don’t really have a question for that.
JT: See previous parenthetical statement in answer to Mucca Pazza experiential description: I will take you there, just give us what we want!
GK: I have a question.