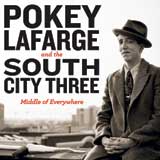 Hear that upright bass a-thumpin’? Washboard raspin’? Guitar strings pluckin’ in ragged time? Must mean a new album from Pokey LaFarge and the South City Three. Though similar to their 2010 release, Riverboat Soul, Middle of Everywhere (produced by Pokey) has a breezier sound, though it’s still steeped in tradition. Somehow it doesn’t grab my ear the way RS does, but perhaps that will change with repeated listens. While RS contains more storytelling elements, MOE leans toward love-related songs. Cornet and trombone add a welcome new texture throughout the album. Among the standouts: “Ain’t the Same,” which showcases slide guitar and harmonica; “Head to Toe,” which opens with awesome bass work; and “Sunny Side of the Street,” which tells of a brokenhearted beer-binge that ultimately turns hopeful. “Mississippi Girl” is vivacious. The one-two punch of “Weedwacker Rag” and “Drinkin’ Whiskey Tonight” is an energy drink for the ears, the latter surely to become a barroom anthem. As always, the musicianship of the entire band is fantastic. Absolutely worth a listen.