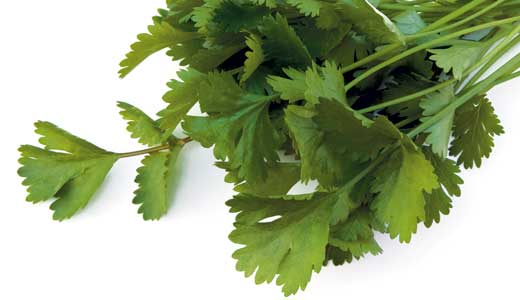 There are few things in life I’m as passionate about as cilantro. I love cilantro. A friend once told me he hopes I walk down the aisle one day with a bunch of cilantro. Another had a custom silver bracelet of a cilantro leaf made for my birthday. I may be more extreme than most with my love of this flavorful herb, but cilantro has an outspoken following of critics as well. Few — if any — foods are as polarizing as cilantro.

Cilantro has a strong taste. People fond of the flavor love the way it enhances a dish. Those who abhor it complain that it’s overpowering.

Although I can’t fathom not liking the flavor, some people find it imparts a soapy taste and aroma. And while I’m inclined to characterize these haters as completely irrational, that might not be the case: It turns out a substance found in cilantro is commonly used in soaps and lotions.

This anti-cilantro faction lobbies fiercely against its use. There’s even an “I Hate Cilantro” Facebook page. Sadly, there’s not much action on the cilantro lover’s side of the equation, but I like to think that’s because we’ve already won.

I remember the first time I discovered cilantro. I was a teenager studying abroad in Guatemala, and a fairly picky eater. I ordered a plain cheese quesadilla at a little café one day after school. It came with a side of pico de gallo, which I tasted apprehensively. I couldn’t believe how flavorful it was. What was that flavor? Lime? Tomato? Onion? Nope — it was cilantro.

Antonia Demas — founder of the nonprofit Food Studies Institute — started an in-school cooking and education program called Food Is Elementary. One of the premises of the program is that children are more likely to try a new food after they have learned about it and engaged in its preparation. Demas claims it takes about 12 times before a person acquires a taste for a new food. With continued exposure, both children and adults might develop a broader palette. The same technique can work for the cilantro-phobic: If you make yourself get through it enough times, you might start to like it.

I decided to test this theory with beets, one of the few foods I dislike. Every time I have been served beets over the past year, I’ve eaten them. And as much as I hate to admit it, I’m actually starting to like them. But back to cilantro …

The herb cilantro is actually the leafy part of the coriander plant. The plant produces coriander seeds at the end of its
growing cycle.

Regardless of how you feel about cilantro, it’s good for you. It’s a dark, leafy green, so it is rich in vitamins, minerals and antioxidants. Perhaps most interesting, though, is that cilantro is a natural chelator of heavy metals, meaning it draws heavy metal toxins out of the body. If you consume a lot of large wild fish, like tuna, this is a good thing.

Cilantro is easy to grow from seed, but the secret is successive plantings. The herb starts to bolt (turn to seed) fairly quickly in hot temperatures to produce coriander. The resulting seed can then be harvested and used throughout the year. If you’d like to prolong the life of your cilantro harvest, cut off the flowering tops to prevent it from bolting.

Cilantro is available fresh year-round in the grocery, but there is nothing like picking up a bunch at the farmers market or harvesting your own. Cilantro is best when used fresh, but it can be frozen and used in soups. To save cilantro, coarsely chop it and sprinkle in an ice cube tray. Place just enough water in the tray to cover the cilantro and freeze. The cilantro ice cubes can be placed in a zipper bag and stored in the freezer. Cilantro is my secret ingredient in chili (add it at the end) — a perfect way to use these cubes.

Harvest coriander seed when the seeds start to turn brown, but before they get dispersed. Store the seeds whole, and grind using a mortar and pestle when needed.

Cilantro goes great with much of the fresh produce in season now: tomatoes, corn, cucumbers, peppers and onions. Here are some of my favorite cilantro recipes using fresh, seasonal ingredients. To make these dishes tasteless and boring, just omit the cilantro.

1 ear of sweet corn, cut off the cob

Heat oil in a small skillet and sauté onions until translucent. Add corn, cumin and salt, and sauté two-three minutes. Stir goat cheese in a bowl to soften and add the corn mixture. Divide goat cheese and corn mixture between four tortillas, and top with the remaining four tortillas. Grill on oiled skillet until brown and crispy on both sides. Quarter, and drizzle with cilantro pesto.

This makes a great marinade for proteins, and a shmear of this on a tomato sandwich is magic.

½ of a jalapeño (more if you like it spicy)

Combine all ingredients except oil in a food processor and pulse until smooth, scraping down the sides as needed. Slowly drizzle in the olive oil.

Cut cucumbers lengthwise and scoop out seeds. Slice cucumbers in quarter-inch pieces and place in a bowl with jalapeños and peanuts. Combine sugar and rice wine vinegar and mix until sugar is dissolved. Combine. Add peanuts just before serving.

4 ears of sweet corn, raw, cut off the cob

½ of a jalapeño pepper

Salt and pepper, to taste

Combine all ingredients in a bowl and mix.