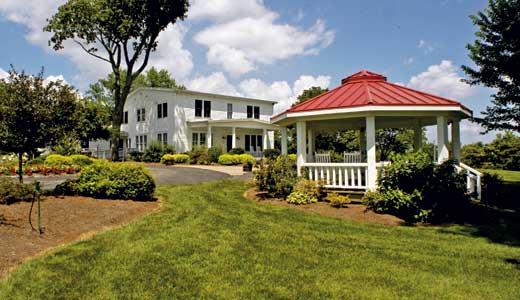 My favorite character on “Fraggle Rock” has always been Uncle Traveling Matt. In addition to slightly resembling the Indiana Jones-inspired Muppet creation, I also share his love of exploring unknown territories, having adventures and sending postcards to loved ones. This yearning to discover more about the human world, some place scary but exhilarating and far away from my cave, has at times gotten me in trouble. It has been lonely, expensive and dirty at times. But mostly it has been rewarding.?

?And that’s how I wound up surrounded by a gang of bikers in a small town in Southern Indiana last month.??

OK, so this wasn’t exactly Pee-Wee’s big adventure, and even less like Hunter Thompson running with the Hell’s Angels. No, this adventure was lovely and peaceful, almost downright bourgeois in its execution.??

I’d seen the Leavenworth Inn’s Living Social Escapes deal months before and hoped it could work as a potential wedding anniversary destination. It was our second anniversary, which left us with a near-impossible dilemma: What could we possibly do to top last year — or the year before that? It seemed inevitable that nothing would be fantastic enough, so why not settle for a B&B somewhere in Indiana, near nothing in particular???

I am no expert on the land and culture of Indiana west of New Albany. Is anyone? (If so, why, exactly?) I didn’t come here to insult — I like driving around small towns, quiet places filled with dilapidated barns; perhaps not 24/7, but they fulfill a piece of me that needs tending to, too. The map told me Leavenworth is a town only about 40 minutes from my big city home, which sounded like an ideal distance for some unseen location that might be wonderful or horrible.??

My wife seems to like it when I plan mystery trips, surprising her upon arrival (or as close to our destination) as possible. Being a slicker, I didn’t know that Leavenworth is conveniently located near the town of Marengo. As an adventurer, I love caves, and my wife loves me, so she knows this about me. Therefore, she assumed I had something cave-centric planned as we exited the highway. But no, not yet at least. We turned off and I went left when the road to Marengo went right.??

After 10 minutes of rural Americana, we approached “downtown” Leavenworth. I’d expected an adorable block of antique shops run by stout ladies named Margie, but that’s not what we found. Just before we reached the Inn, we passed by the restaurant I’d read about — the Overlook. The menu seemed good enough, full of homemade comfort food. But I hadn’t expected to see a dozen bikers milling about (if bikers can be said to “mill”). I started to wonder whether this was going to be another one of my bad ideas.

I did my research this time, though; I did not go foolheartedly into another situation without assurances that my basic needs would be met: Will there be modern air conditioning? Of course. Is there a private bathroom? Sure. TV? Yes, with cable and a stocked DVD library. OK, great. But wait — there’s more: fresh cookies baked daily, a walking path, tennis courts, shuffleboard, even Wi-Fi, so I can catch up with your feelings about today’s lunch and/or weather when I check Facebook.?? Then there’s the view. A lot of the value of this particular property and the Overlook restaurant across the street is that they both overlook the Ohio River Scenic Byway. It’s a pretty sweet view. After settling into our room, my wife soon declared, “I feel really relaxed here.” I did, too. We had most of our basic needs met, and there were very few distractions.??

Walter’s Pub can be found under the Overlook. Not only do they have a few craft beers mixed in with the regular swill, they also have a deck with the best view of the river. BBC in hand, I sat calmly, gazing out at the peaceful water while the trashed and trashy lady at the next table instructed her companion not to mess with her.

Really, though, we didn’t mind her much. It was part of the experience — this wasn’t the Hamptons, after all — and nothing that we don’t see six times a week in Schnitzelburg.??

We took a quick detour into “downtown” (a few buildings within shouting distance of the Inn) and discovered Stephenson’s General Store, a legitimately old-timey trading post (100 years old) full of homemade candies, an ice cream parlor, gag gifts, random groceries and hardware. We left 20 minutes later with a bunch of desserts, a “Beware of Dog” sign, Chicken Poop brand lip balm and a tiny glass boot made for drinkin’.

We did have to share a quick breakfast the next morning with some guy who seemed sad, but fresh fruit and another gooey cookie diverted my attention. We had to leave way too soon. On the way home, I got to see the cave, and accidentally discovered a record store in Corydon, of all places.

And so we managed to have fun, see sights and get away from it all — and we arrived in less time than it takes to watch an episode of that Jim Belushi TV show about the fat lawyer who shouts a lot.