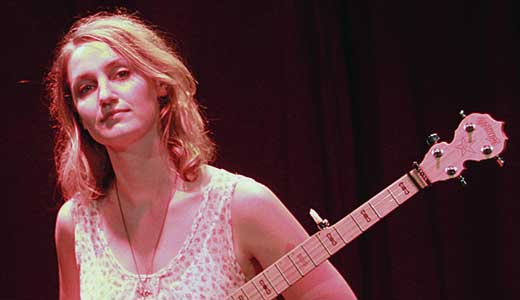 Joan Shelley started making up songs when she was just a little girl.

“My mom helped me record and submit my first song to a contest when I was 9. I got a trophy for that, which really encouraged me. One day, I found my mom’s old guitar in the attic and started learning from a poster of guitar chords that was lying around up there. I proceeded to write a heartbreaking song about teen love. If I was 14 today, I would’ve put that thing up on YouTube and I’d be a huge hit by now.”

And so began the musical odyssey of Shelley, who may or may not have been born at the right time, but is beginning to get noticed on her own terms for some heartbreaking — and funny — songs today.

The singer/guitarist/banjoist, who also performs with the trio Maiden Radio, has always been musically involved. She also sang in a choir in her youth. “It was always a part of my life, but I had kept it under control in the ‘hobbies’ column. Then I went to the University of Georgia (in Athens), partly because I knew it was a big music town and I wanted to play in bars and coffee shops while I was there, which I did.

“As far as earning a living, I always imagined something romantic and academic, like marine biologist or cultural anthropologist (which is what I went to school for), but I realized I had more passion for creating those images in my head than actually focusing intensely on one very specific academic question,” Shelley says. “When I realized that there were ways to promote environmental health and social justice without being an academic, and that if I really wanted to learn anything I could just read a book, that released me to pursue the things I really love to do, which are performing and writing songs.”

She calls “Ms. Gillian Welch” her “No. 1 songwriting hero,” and learned to sing harmonies by imitating Mom singing along to Kingston Trio albums. Family has strongly influenced her musical perspective.

“My first attempts as a music archivist consisted of me recording my favorite songs off the oldies radio station onto my Fisher-Price tape deck. When I started buying my own CDs, it was pretty awful what me and my friends listened to. Ace of Base was my first purchase, I believe. I was so proud. But my older brother Doug saved me by giving me mixtapes with songs like Nick Cave’s ‘Red Right Hand’ and Neil Young’s ‘Cinnamon Girl.’ I’d be lost without my brother.”

Shelley released her own album, By Dawnlight, in June 2010, and has a second record almost completed.

“No one knows me out of town yet, except in the towns where I have lived. Those shows where you are an entirely new thing to the audience are really exciting and liberating for me. They are discovering you as you perform. You can be and do whatever you want on stage in front of that kind of crowd. One of my goals is to feel like that performing to a hometown crowd. When I play in Louisville, it feels more like a party I’m having where I’m making my friends be very, very quiet. They’re the most fun shows, but it’s funny that way.”