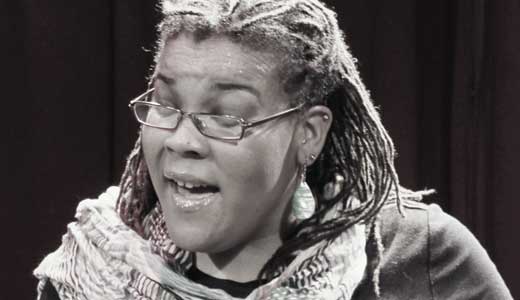 Yolanda “JD” Green was surprised by the message, not having given much thought to singing since leaving her hometown of Detroit for Louisville, for reasons of love and pursuit of her PhD. Sure, college included the requisite classical training, an early group, contests and showcases. But life led her down a different path, and she put down the microphone. “I didn’t see where I fit in,” she says. She wasn’t gospel, R&B or jazz. So she resisted the call, thinking it was a “narcissistic” exercise. But the requests continued.

Nearly a year later, a chance conversation with her hairdresser led JD to local violinist and JazzyBlu staple Maestro J and an opening slot at the Market Street nightclub. An artist was (re)born.

Her debut album, Diurnal Movements, was itself more than a little unintentional. When her local performances led to the inevitable question of “Where can I buy your CD?” she started asking friends and other performers about writing for her disc. “Why aren’t you writing?” they asked. Timidly, the first song came out in July 2009. Fifteen more songs flowed from her pen by the album’s release in June 2010.

Diurnal touches on an array of experiences: From the opening scat of “Day” to the spring newness of “Crush Pt. 1” to the Jilly-from-Philly vibes of “Commute,” almost everything on the disc works, a remarkable accomplishment for a first time out, particularly given the absence of label support. JD wrote every song, while musical director Trey Latham handled production duties. “I wanted a layered album,” she says.

Variety is the key. At the same time, without the professional team behind her, she has to depend on herself as well as some trusted friends to determine what works — and what does not. “I’m emotionally invested, and when it’s not ‘perfect,’ do I fix it? You have to listen beginning to end, over and over. Sometimes,” she exhales, “sometimes you have to take out pieces that matter.”

JD hyphenates her style: soul-funk-gospel-jazz-indie-pop-songwriter. The iTunes Music Store lists her album as “alternative.” Radio hasn’t been a focus, though she wouldn’t be mad at a spin or two from WFPK’s Laura Shine. An active Twitter user, JD breaks down the fourth wall to her creative highs and lows with almost reckless abandon, bordering on a “TMI” path of artistic passion, desire, uncertainty and drive.