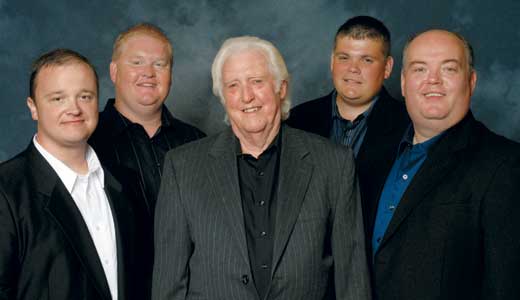 Native Kentuckian J.D. Crowe is a legendary bluegrass banjo player who started with Jimmy Martin 55 years ago and then, in the early 1970s, went on to lead his own influential group, the New South. He returns to us for a free concert on the square in downtown Corydon, Ind. LEO enjoyed a warm conversation with the master.

LEO: Where do you call home these days?
J.D. Crowe: I live in Nicholasville, Ky. It’s a suburb of Lexington — now (laughs). I’ve seen a lot of changes through the years, yes. I think it’s good.

LEO: You’ve seen a lot of changes in your music career, too.
JDC: Ninety percent of it’s been good, 10 percent of it not too good. But for the most part, it’s been good, the growth and everything — you gotta have it. If you don’t, things get stale. There’s some parts of it that’s … I won’t get into that, some of that’s kind of a personal thing. I tell you what, the recording industry is kind of in a slump. I think the Internet, it may be all right, but I think it’s hurt, in a way. It sure hurts our CD sales, from people going to the music stores and buying them like they used to. It’s definitely hurt, but in other ways, you can get on there and instead of buying the whole CD, you can buy one song. It comes out about the same, probably.

LEO: Has the Internet been helpful for gaining new fans?
JDC: Oh, yeah. I think the Internet has helped as far as getting exposed to the music where they can’t be exposed otherwise. Because not that many bands travel abroad to play, so they don’t get to hear a lot of the pure bluegrass that we do over here. But they get on the Internet, and everybody’s got a website where they can hear and see cuts of the bands. I’ve had requests from other countries to send them a CD. I’ve had some notes from France, Australia, Finland — of course, Japan. I’ve been in Japan and Europe a couple of times. It’s very sparse, though.
LEO: Do you mostly tour in the summer these days?
JDC: I’m on the road about 50 days a year. That’s all I want. It’s tiresome. I been there, done that, those 200-days-a-year deals; I don’t want to do that anymore.

LEO: You’ve also played with some rock bands and jam bands.
JDC: It’s amazing how many people they draw, (laughs) as opposed to bluegrass. That’s what always amazed me. And I know why, too — it’s the media. They’re always pushing the rock ’n’ roll; it just appeals to these younger people. That’s the whole deal. I’m not specifically talking about Louisville or Lexington — I’m talking about worldwide. Your TV, your big musical stations — it’s all over, it’s not local. It’s a different era right now than it used to be. People think different, everything’s just different. You just roll with the flow, that’s it. I don’t worry about it, there’s no use to do that. So just do what you’re doing and let everybody do what they do — everybody’s happy.

LEO: You have some younger bluegrass fans, too, who’ll come to see you.
JDC: They do, they do. Probably not enough (laughs). But hopefully they’ll come around.

LEO: Any plans to make a new record soon?
JDC: I’ve slowed down on that. I probably should. My last’s been out probably five or six years. We’ll probably do another one. At this stage of the game, I don’t worry about things too much. It is important to have a new CD out, I think it’s very important, it’s just that I don’t right now. We’re looking for songs, I’m trying to do something different; when we get ready, we’ll go in and start.

LEO: What can we expect from your live show?
JDC: I think we do probably about an hour and 15 or so. You can bring anyone. It’s a family-oriented show, that’s for sure. You don’t have to worry about that. I can’t guarantee the rest of it … (laughs), but I know what we do! Basically, it’s a good show, sure is. It’s a listening show. As I tell people, we’re not a dance band. We don’t do dance music. We prefer not to, let me put it that way (laughs). That’s a little out of our league.