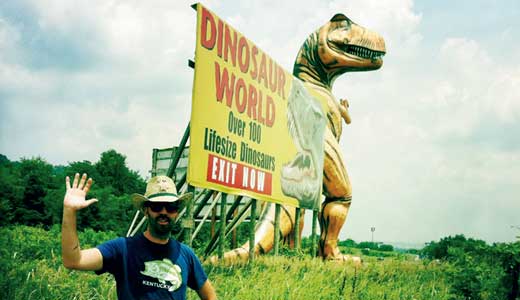 Let’s begin with a parable.

A boy, hanging out at the Phoenix Hill Tavern with his dad, wins a whitewater rafting trip during an event sponsored by a local radio station and Barq’s root beer. And so father and son embark east toward the rolling hills of West Virginia, eagerly anticipating the river’s gulps and regurgitations of their boat. What fun they would have.

As father and son drive along Route 60, they spot a sign inviting them to a wooden shack containing a “Mystery Hole.” Unable to resist the roadside attraction, they park, pay a dollar and meet Mr. Wilson, a billy goat of a man with white hair and a round belly resting atop polyester church pants. The boy’s curiosity soars as they’re led to the hole.

Mr. Wilson flings open a door, and as father and son walk through the Mystery Hole’s many rooms with slanted floors, they find it impossible to stand up. At one point Mr. Wilson, who leans at a firm 45-degree angle, spews scripture and smacks a light bulb, creating a tantrum of shadows as it swings. The father and son feel nauseated as both fight to stay upright. But neither can stop laughing, each wretched tumble inspiring another outburst.

“I left the Mystery Hole a new man,” the now 35-year-old Will Russell says at a coffee shop. He found the absurdity delicious. “Whitewater rafting? Whatever.”

Since then, he’s successfully turned campy culture into a career. He and a friend started the popular Lebowski Fest, a musical, bowling-themed, White Russian-drenched celebration of the movie, “The Big Lebowski,” now held in cities across the United States.

So it makes sense that the next chapter in Russell’s life may take him to Cave City, widely regarded as Kentucky’s kitsch capital.

Russell’s proposed project, called Kentucky Wonders (beating out contenders Kentucky Wonderland and Kentucky Dreamland), is less than a month old. But already the idea has spread through Facebook circles and friends, and the reactions range from jubilation, “Awesome!!!!!” to desperation, “Oh my God, PLEASE let this happen!”

It’s pitched as a 20-acre cradle of amusements along Interstate 65, neighboring the orange dinosaur grimacing just above the tree line. The crown jewel, says Russell, will be Kentucky Rushmore, a twist on Mt. Rushmore. He envisions it as 50 to 100 feet tall, with four Kentucky icons etched in artificial stone: Abraham Lincoln, Colonel Sanders, Muhammad Ali and Triple Crown winner Secretariat.

He spots a friend walking into the coffee shop and leans back in his chair.

“Have you heard of Kentucky Rushmore?” he asks.

“There’s going to be a log ride. The water will be beer,” he adds.

While that idea is conceived in the moment, he does have a tentative list of attractions to accompany the manmade mountain: A haunted museum of oddities featuring the likes of Hillbilly Sasquatch and the Pope Lick Goat Monster, an amphitheater for live shows, and a WHY Kentucky store, similar to his WHY Louisville gift shop that sells a wide range of unique crafts, posters and T-shirts.

He’d also like an onsite studio for artists to create installations, like a replica of Pee Wee’s Playhouse or a disco packed with Ewoks.

“We’re for the project 100 percent,” says Cave City Mayor Bob Hunt. “The more variety you got, the more people will come.”

He says Mammoth Cave National Park typically brings about 2 million tourists into the region each year, but Cave City is hungry for more. In 2005, the once dry city passed a liquor-by-the-drink referendum. Their tourism development website touts the area’s “mammoth potential” and makes a pitch for an outlet mall, IMAX theater — any entrepreneurial venture.

For Russell, developing a roadside attraction has been a lifelong dream, rooted in the Mystery Hole and the swell of nostalgia that memory holds.

For many Louisvillians, exit 53 is a portal to simpler days, when piling into the wagon for a weekend was time well spent. While that preservation of the past is its draw (Nixon is still in power in the Mammoth Cave Wax Museum’s glass-encased Oval Office) it hasn’t been entirely deliberate.

Longtime Cave City dwellers say in the ’80s and ’90s, tourism waned and many of the attractions became run down or shut down. The demand for Starbucks along the highway and the last decade’s sluggish economy has kept a renaissance dormant, not only here, but also at other roadside destinations across America.

Jack Rickett knows this well. He’s opened and closed an ATV buggy ride and driving range in Cave City. He now owns Big Jack’s Rib Shack on land where Golgotha Fun Park, a Christian-themed putt-putt course, used to sit. He sold Russell — who may revive Golgotha — some of the chipped-paint biblical statues like Eve and Jonah and the Whale. That’s when Russell told him about Kentucky Wonders. Rickett loved the idea.

“I’m doing what he’s trying to, which is put life back in this community,” Rickett says, adding that he’s warned Russell about locals who may resist his youthful vigor and imagination.

“It’s kind of a clique down here, and they’ve been down here for 15,000 years,” Rickett says. “But he seemed like a savvy dude who wanted to spark change, and I think he’s going to make a great alliance.”

Rickett also advises LEO some of the old-timers may not take kindly to a reporter calling and asking questions.

“You should come down and meet people in person.”

New Blood and a Boone

Tony Tanaro wipes his face with a towel, his blue shirt soaked with sweat. He’s just come down from Guntown Mountain where he plays music in their Wild West show.

“We may be in Kentucky but this is the Old West to us,” Tanaro says, looking down from the hill where his decades-old Haunted Hotel sits. And so perhaps it was Manifest Destiny that compelled Tanaro to buy the once-defunct attraction, and add a black-light mini golf course.

The 42-year-old, who talks of many sepia-toned summers spent working at Cave City as a teen, was surprised when he met someone equally as thrilled with the Haunted Hotel’s reopening.

“We could definitely use that energy around here,” he says, hoping the momentum doesn’t fizzle. “So many people come in and say they’re going to do something and they don’t.”

First, Russell has to find the money. He’s started fundraising with T-shirt sales and may apply for a state loan or tax incentive program available for tourism development. He’s adamant about not incurring personal debt. But building a mountain is expensive. It’s new territory for Russell. Good thing he’s got a Boone on his side.

Forest Boone, who claims Daniel Boone as his seventh-generation uncle, is a Louisville-based sculptor of faux rock formations for museum exhibits and amusement parks. His most impressive mountain measures 136 feet long, 22 feet high and 20 feet deep. The structure is made, in part, of rebar, rubber-coated Styrofoam and grout. Charles Schultz’s widow commissioned the $2 million work for a Navajo memorial in Hawaii.

Russell’s budget will likely be less than half that, but Boone wants in on the project.

“I like the idea of Ali’s glove coming out of the mountain, and a rock breaking away, like it’s threatening the dinosaur,” he says. “And I’ve talked about doing caricatures of the faces, exaggerated expressions.”

Russell says that while Lebowski Fest started with just an idea and $30 worth of flyers, Kentucky Wonders feels like a more massive undertaking. He jokes that if it succeeds, he may just wind up as the mayor of Cave City. In a town stocked with dreamcatchers, why not dream big?

“If I had a Magic 8 Ball, all signs point to yes,” Boone says. “If anyone can make it happen, he’s an absolute genius in making these kinds of things happen.”