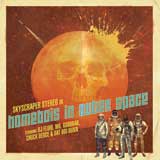 The scene: a mother and daughter in a studio. The toddler is there to say a few words for a hook, a reference to an Internet meme from a couple years back. The daughter, obviously well-behaved, balks at the request at what she’s asked to say, and her protests are golden. Played in family court, though? A whole ’nother matter. This is Skyscraper Stereo’s best album. Coming after strong solo outings from Mr. Goodbar and Dat Boi Dunn, the group sounds more at ease and confident in their abilities than ever. It’s impossible to pick a favorite, though the vocal effects and subject matter on “GFYS” demand repeated listens. “Lord Lord” is a rare serious take from the group, who tend to keep things light, and is producer Chuck Deuce’s piece de resistance, a multi-layered, country-flavored bounce played live. Chuck shows himself to be as strong a player as he is a beatmaker and emcee. The variety of production alone, all from Chuck, should bring Skyscraper the attention they deserve once and for all. This is Louisville hip-hop’s golden era.