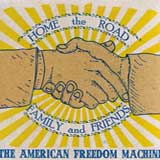 The name scared me. Who knows what to expect from a group who would choose “The American Freedom Machine” as their handle? The Harley-Davidson tagline lends itself to every “Easy Rider” cliché available, and at first listen, it’s impossible to gauge the level of sincerity from the players of this indie-country ensemble. Things start roughly, as the first couple songs seem entirely too self-aware to be serious (“Big Ol’ Country Girl,” “Bluegrass Sunsets”). The former could be a barnburner live, but to open the record with it feels like too much, too soon. The album settles into a more comfortable vibe with the beautiful “Barstool” and “Blue & Gold.” These are the radio songs. “Barstool” is a lament in waltz form, while “Blue & Gold” amps up emotion across the board. The songwriting is more evident; this isn’t a song played by a bunch of friends, this is a fully realized effort. There’s enough worthy material here. In the age of playlists, rearrange and whittle this one to the perfect six out of 10.