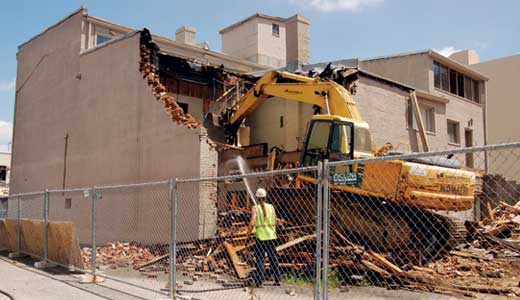 With the sun glaring overhead, a three-story, beige brick building provides shade to a scant crowd in place for a press conference. It will be the roughly 120-year-old structure’s last use.

With a lattice of chain link at its base and a bright yellow “NOTICE OF INTENT TO DEMOLISH” sign hanging above the front doors, it’s the 11th hour, more specifically, the afternoon of July 21.

“Frankly, sadly, there’s not much that can be done,” says Martina Kunnecke, president of Neighborhood Planning and Preservation Inc., the grassroots nonprofit that mustered this last-minute protest for the so-called “Elmo’s” building, named for a bar it once housed.

A few members stand behind Kunnecke with signs that read “This Building Matters.” But the audience they need to sway is neither around nor open to debate.

“After today, this building can come down at any moment,” Kunnecke says. “And it is a result of a back door deal that was done between Mayor Greg Fischer and Mr. Todd Blue.”

In May, Fischer (with the help of several investors) announced the majority of Whiskey Row would be saved. Four of the seven buildings would be bought from Blue for $4.8 million. A fifth would be donated to the Louisville Downtown Development Corp.

Within this multi-page agreement, the city committed to providing Blue, president and CEO of Cobalt Ventures, with “all permits and approvals” to demolish 306-310 E. Main St. — the Elmo’s building — for a surface parking lot. When a fact sheet on this agreement was provided to Metro Council, the language was slightly more nebulous. It read that Metro will use its “best efforts” to obtain wrecking permits.

So, with that gentle edict in mind, several weeks later the Downtown Development Review Overlay Committee approved the permits. According to minutes from that meeting, only one member opposed the demolition, but ultimately voted for it.

Preservation Louisville Inc., a three-year-old nonprofit, expressed disappointment with Elmo’s demolition, calling it “collateral damage.” Still, the group points out that the more historically significant structures along Whiskey Row have been salvaged.

But Neighborhood Planning and Preservation Inc. maintains that bartering buildings is bad for preservation. They want the city to create a downtown preservation district, which would serve as a blanket protection for historic structures, unless a developer can prove keeping the building will result in severe economic hardship.

Such preservation districts already exist in seven Metro neighborhoods, including Old Louisville, Butchertown and Clifton. Despite past efforts, such protection is absent from most of the city’s urban core.

Local preservation concerns mounted in the 1960s. In the “Louisville Guide,” an essay by Edith Bingham (of Louisville’s prominent Bingham publishing family) explains how urban renewal at that time wiped out swaths of downtown, including the Columbia building, one of Kentucky’s first skyscrapers, and a flourishing African-American community along Walnut Street.

A small group of citizens were advocating for preservation at the time, and for Jim Segrest, it was instinctual. He says his first battle came as a college student living in Old Louisville. On his way home from school, he saw a contractor tearing out large Victorian windows and replacing them with smaller panes. He stopped and relayed his outrage.

“It was completely inappropriate,” says Segrest, sitting in his dining room stocked with antiques. “And I told him so.”

In 1972, a coalition of advocates called Preservation Alliance formed, and Segrest, who worked as a city planner, joined the board. The following year, the city passed its Landmark Ordinance, carving out a process for the protection of historic structures. The National Preservation Act had created the National Register of Historic Places a few years earlier, and so the Alliance got to work.

Sounds like plenty of protection, yes? Sort of, says Segrest, who joined Neighborhood Planning and Preservation Inc. after the Preservation Alliance disbanded.

A spot on the National Register of Historic Places garners a title and eligibility for federal historic rehabilitation tax credits, an incentive Kentucky fully takes advantage of, ranking eighth nationally in 2010 for the utilization of those credits. But being on the register does not shield a building from being torn down; local designation makes demolition far more difficult.

“That would raise the bar pretty high,” says Richard Jett, preservation officer for Metro’s Historic Landmarks and Preservation Districts Commission. “That means there’s a process — hearings and all that — to tear down.”

Designating a building a landmark starts with either a written request by the property owner or a petition signed by 200 people. The commission then researches and makes its determination. In the downtown core, Jett admits a lot of buildings probably get overlooked.

In fact, an ongoing $300,000 survey of historic structures throughout the county located 208 significant structures in the central business district; 31 are currently landmarked.

The first step toward creating a downtown preservation district, should Neighborhood Planning and Preservation Inc. decide to proceed, would be to gather signatures and pay a $1,500 fee to the city. Ultimately, Metro Council would have to approve the downtown district, which could be difficult.

During a battle over the demolition of the Brinly-Hardy complex on East Main back in 2004, Segrest pushed for a downtown district, but the idea never attracted much political will or community support.

“At the time, a lot of people were appalled we’d even think about it,” says Segrest, adding that the idea was viewed as anti-progress.

Daniel Vivian is passionate about the economics of preservation. He teaches history at University of Louisville and for five years worked with the National Register of Historic Places in Washington, D.C.

Holding onto Louisville’s distinct downtown structures will attract boutique businesses that make the city attractive to big companies looking to relocate, he argues. Skyscrapers and convention centers are ubiquitous. On the other hand, a place like 21c in a 19th century building makes an impression.

Louisville hasn’t reconciled preservation as an economic development tool, Vivian says. While it may limit what developers can do with their property, it gives them access to historic tax credits and tax abatements, and property values in historic districts appreciate at a greater rate and tend to hold their value when compared to non-historic areas.

“If you look at restrictions versus return,” he says, “it’s a pretty compelling economic argument.”

Louisville does have a downtown overlay that’s intended to guide the city’s new development with existing land use to help “enhance” the “visual quality” of downtown. But these are suggestions not mandates. After all, one of the first guidelines says, “Development of downtown sites solely as surface parking lots … is discouraged due to their negative impact on the street wall … and pedestrian friendly character of downtown.”

As for the Elmo’s building, Chris Poynter, the mayor’s spokesman, says, “We always hate to lose an older building, but in this case we believe — we know — that it helped save Whiskey Row.”

LEO contacted Todd Blue on Monday to ask about the Whiskey Row/Elmo’s deal, his decision to demolish, and whether the site would ever house anything other than a parking lot. In response, Blue a) reminded LEO that he is our landlord (which is true), b) insisted he has done a lot for preservation (Blue has renovated aging buildings on Market Street), and c) said, “I’ve never torn a building down.”

Within a few hours of that last statement, however, bulldozers were ripping into the historic Elmo’s building.