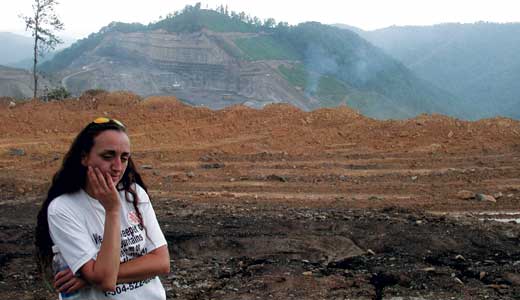 Let’s face it — the mountaintop removal thing is kind of done, right? Massey is going to get their coal, so what do you want me to do about it? Recycle more? I suppose I could go hold a sign up in Appalachia somewhere, but I really don’t think I’d be good at that. Frankly, the thought of getting poked in the chest by some miner’s ink-black index finger makes me wilt like a posy in a CO2 cloud.

Then there’s the eco-doc: I mean, why do we do it to ourselves? It’s like watching video of yourself getting bullied in grade school. You get infuriated. You get moved to take action. You ask, what can I do, then realize your choice falls somewhere between getting your ass kicked again or maybe just recycling a little bit more.

“The Last Mountain” is very much a bully story. It’s impossible not to empathize with the seemingly powerless West Virginians who dwell in the valley between a mountain that’s been blown open for its coal and one that’s slated to have the same fate. Adding injury to insult, the major corporation running this operation dumps their exploded “overburden” into the valley with little concern for the lives below.

And there’s little the hollow dwellers can do about it, considering their junior Senator, Joe Manchin, appears to be in the pocket of the coal industry — as “The Last Mountain” tries to show. When violations are levied against Massey (which happened 60,000 times between 2000 and 2006,) the company easily bats them away, either through legal means or simply paying the nominal fines.

Environmental crusader Robert Kennedy Jr. advocates for the people of the Coal River Valley and plays a key role in this Bill Haney-directed, Clara Bingham-produced film. In a recent Wall Street Journal interview, Kennedy highlights the extent of the mismatch between Big Coal and Appalachia, pointing out that if Massey blew the top off of a mountain in the Berkshires or buried 100 feet of the Hudson River Valley with overburden, it would be considered a major crime against the environment, and those responsible would go to jail.

Not so in certain parts of the country. It’s as if the industry singled out the smallest kid in the class, knowing the majority of us would not care to step in.

Now that the eco-doc has become something of a sub-genre, the challenge of crafting an important one has grown increasingly tricky. Al Gore’s “An Inconvenient Truth” brought with it a sort of “end of innocence.” Reactions went something like: I didn’t realize it was this bad, did you? Well, at least this film is going to put an end to all of that!

“An Inconvenient Truth” may have changed the world, but it fell far short of saving it. If anything, the Best Doc Oscar winner added fuel to the Denier movement that created today’s “shadow of a doubt” acquittal of major carbon emitters. In a sense, this meaningful piece of work, which seemed poised to unify us against global warming, was somehow marginalized to preaching-to-the-converted entertainment for the left-leaning.

Now it’s not enough to simply illustrate how imperiled we are. Documentary makers are expected — rightly or wrongly — to offer solutions, which “The Last Mountain” doesn’t really do. (Although, it does devolve into a bit of a commercial for wind turbines.) But what about the viewer’s responsibility in all this?

As far as these types of sermons go, at times, “The Last Mountain” is as competent and convincing as any of them. It’s filled with heroes who do what most of us can’t — entering hostile territory, blocking the paths of machines that can chew through rock, hiking for miles under the cover of darkness, and camping in trees so that a mountain can be spared a few more days.

So why bother watching “The Last Mountain”? You already know how we’re turning our landscapes into “moonscapes,” to borrow Kennedy’s term. You probably feel bad enough about this already. You know how angry the film is going to make you and how you’re not going to do anything about it.