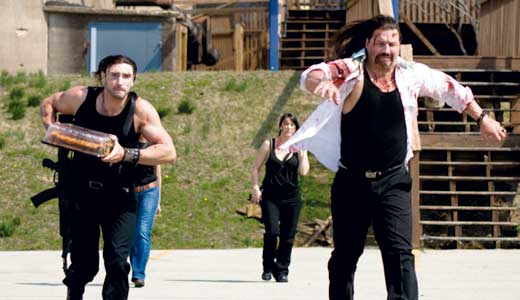 Think “Pulp Fiction” as a “Living Dead” flick, with a Judd Apatow twist.

“It has an ’80s action movie feel to it,” says Cunningham, the film’s co-writer, co-producer and director of photography. “What I think really sets this apart — the real friction in the story — is that the Raph character is on the outs with his wife, who’s fed up with him missing family events. The real thrust of the story is that Raph is trying to get out of this zombie-alien attack so he can get to his kid.”

Founded by Ken Daniels in 2005, Fright Night began quietly, but this year the fest boasts its most fearsome line-up to date. It features 150 films and an appearance by “Halloween” creator John Carpenter, a Kentucky native. Daniels has also spun-off a new pop culture element to the festivities: Fandom Fest, which will include guests such as actors C. Thomas Howell, Henry Winkler and Linda Blair (“The Exorcist”), plus actors from “The Karate Kid,” “Revenge of the Nerds” and the Bruce Lee classic “Enter the Dragon.”

Fright Night and Fandom Fest — this weekend at the Fern Valley Hotel and Conference Center — also feature guests and vendors from the realms of video games, sci-fi and fantasy literature, comics, anime and other geek genres.

“It’s an immersion experience,” says Daniels, a 43-year-old Louisville native who works in advertising sales. “You get to meet these people and hang out with your idols.”

Someday, Daniels says, he’d like Fandom Fest and Fright Night to rival San Diego Comic-Con, which last year drew about 130,000 geekdom enthusiasts. Last year, Fright Night drew about 3,400 attendees for a line-up headed by legendary sci-fi director/producer Roger Corman. This year, Daniels says he expects his festivals to double in attendance. In the future, “This is going to be one of the largest shows in the country of its type,” he predicts.

But before his fest dominates pop culture like Comic-Con, Daniels is plotting to move the festival downtown next year.

Growing up in the South End, Daniels made sci-fi movies with a Super 8 camera; he once nearly torched his family’s home when he used gun powder for a smoky effect. “I love movies, I love entertainment,” says Daniels, who culled most of the films and booked the speaking guests himself. “That’s the stuff I wanted to do as a kid: Go to Los Angeles and make special effects. Now, each year, I create my own Hollywood.”

While he admires the more artistic fare that’s often featured at Louisville film fests, Daniels says he’s long preferred mainstream horror and action flicks — if not Michael Bay blockbusters, he enjoys the kitschy, cult-favorites that are represented in the guest line-up. He’s banking on the notion that most of Louisville agrees with his tastes. “Most Americans love films that are comedy-based or action-based,” he says, before stabbing the dagger of truth at the world’s aspiring auteurs: “People don’t go to films to think.”

Louisville-based filmmaker Kristofer Rommel will show a pair of short films on Sunday at Fright Night. “Balance” is a Sartre-esque sci-fi/mystery film concerning a pair of strangers who find themselves stuck in a room together; “Wireface: In the Beginning” is a short prequel to a feature-length mystery film Rommel is working on. He is also the organizer of the Derby City Film Festival and says he admires the Fright Night team’s progress. “They do a really phenomenal job of bringing horror fans and sci-fi fans together.”