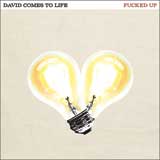 Hardcore opera. Those are the words we’re going to go with to describe David Comes to Life, Fucked Up’s third full-length album. It tells the story of a factory worker (spoiler alert: His name is David) who falls in love with a girl named Veronica. They build a bomb together as an act of protest. You might see where this is heading; Veronica is killed when the bomb detonates early. Plot points aside, David Comes to Life is epic, spreading and ambitious. This is a heavy, loud album replete with slurry vocals and screaming, but what makes all 80 minutes worth listening to is that it’s nuanced and complex rather than merely noisy. Fucked Up are punks to the core, but they’re also skilled musicians who have produced a tight, thoughtful record. Damian Abraham’s intense, relentless vocals are balanced by Sandy Miranda’s daintier backup stylings. David really hits its stride in Act II; the last three tracks are true high points of the record, so hold out for “One More Night” when you think your ears can’t take the sonic overload anymore. Though this is an extreme record, Fucked Up hasn’t sacrificed an inch of craft, and in the process created real art out of a form that struggles to sustain itself outside American Legion halls populated by high school kids.