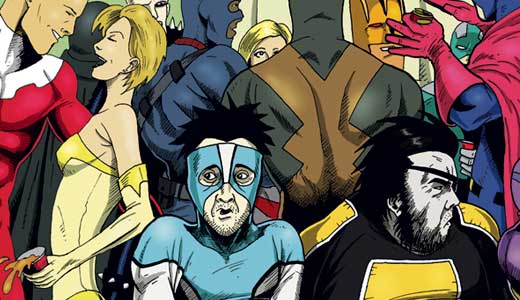 Comic books aren’t just for kids or nerds anymore. In 2010, an estimated $418 million was spent on the sale of comic books and graphic novels in North America. Movies such as “Thor” and “Iron Man” (bringing in $437 million and $582 million worldwide) have brought comic book stories to mainstream America. The craze has even spread to television, with shows such as “The Walking Dead” finding success. With comic book madness spreading across the country, it only seems fitting to celebrate it here in Louisville, and that’s exactly what the upcoming Derby City Comic Con aims to do.

“Little by little, ‘geek’ culture or comics culture has been moving further into the mainstream,” says Eric Banister, promoter and organizer for the event. “There are a lot of comic-based movies that have come out in the past couple of years, and nearly all of the summer blockbusters this year are comic book movies.”

In addition to highlighting mainstream comics, Banister says Louisville has a growing sequential-art scene with enormous talent. He hopes the event will highlight local artists and writers, such as Jay Leisten, who grew up in the Highlands and has since gone on to work for both Marvel and DC Comics, illustrating for titles like “X-Men,” “Thor: Son of Asgard” and “Green Lantern: Ion.” “It’s an opportunity to meet fans and co-workers to talk about what’s going on in the industry and our personal lives,” Leisten says of Derby City Comic Con. “I have been wanting a big comics show here for years. There’s a bit of a void in the market, as you really have to travel four-plus hours to get to a larger show in the area.”

Hoping to fill that void, Derby City Comic Con will offer comic book and graphic novel enthusiasts the chance to talk with some of the creators of their favorite stories — contributors from works such as “X-Men,” “Amazing Spider-Man,” “Transformers” and “The Walking Dead” will be present. There will also be activities for kids, such as an interactive workshop on creating comics and a selection of artists who work on kid-friendly books. It’s not all about fun and games, however — a charity auction will be held at 2 p.m. to benefit The Library Foundation, which supports the Louisville Free Public Library, and to subsidize the medical expenses of Jamie D., co-host of the popular podcast “Comic Geek Speak,” who is battling cancer.

Derby City Comic Con will also hold panel discussions, covering topics such as independent creators and self-publishing, as well as small publishers and companies showcasing their work. One such self-publisher is Steven Bowman, a Louisville native who produces graphic novels under the title Astounding Comics Presents. Bowman says the location of the event is what sparked his interest. “I want to support the convention and get a chance to see and meet other comic book fans in Louisville,” he says. “People should come check out the Derby City Comic Con because we’ve never had anything like it in this area, and it’s a good chance to meet some comic book creators and check out some small press comics that they might not find in their local comic book shop.”

Bowman says that part of the reason for the popularity of comics-related media is the wide expanse of material addressed in comic books. “People have discovered there’s a larger variety of well-written stories than the superhero-in-tights-and-a-cape genre,” he says.

Banister recognizes this as well, adding, “There are plenty of superhero books out there, but you can also find graphic novels in a wide range of genres. A lot of people are surprised that movies like ‘Road to Perdition’ and ‘History of Violence’ are based on graphic novels.”

According to Banister, this is one of the many reasons people should check out Derby City Comic Con, even if they’re not avid comics consumers. “Whatever your interest — history, nonfiction, comedy, slice-of-life stories — there is a graphic novel out there for you.”

Leisten says the event will appeal to people with a variety of interests: “If you have an interest in art, writing, pop culture or just want to meet a large group of interesting and creative people, it’s the place to be.”