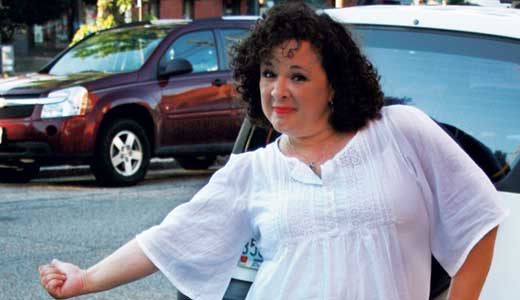 When I say this show has no balls, no one involved will take any offense in the least. The second annual “No Balls of Meat: All Female Comedy Contest” kicks off this weekend with a preliminary round featuring 12 comics who all share the XX chromosome. Founded last year by comedians Teresa McCammon and Janelle Fitzgerald, this year’s event will be bigger and better.

“I didn’t do a lot of publicity last year because it was kind of our pilot,” McCammon says. “But it went really, really well; we had to turn people away because it would’ve been against fire code.”

McCammon, who is also an investigator for The Louisville Paranormal Society, will be featured this fall on A&E Biography channel in a show called “My Ghost Story.” “It’s going to be about the Baxter Avenue Morgue,” she says. “We’re all really excited about it.”

But back to the contest … what about that name?

“In the early stages of planning, we were ordering pizza,” McCammon remembers. “And Janelle asked what I wanted on it, I said, ‘Pepperoni’s fine, mushrooms are fine, but no little balls of meat,’ like sausage. And we just got to laughing about that, so we called it ‘No Balls of Meat’ and just let people read into it what they wanted.”

This year, the ladies will compete for a cash prize and the famous Meatball Trophy, which comedian Lindsay Boling walked away with last year. “I’m not going down there because it’s a contest,” says contender Courtney Kay Meyers, a comic based in Indianapolis. “I’m going down there because it’s an opportunity to see my friends I don’t get to see all of the time. It’s just an excuse to come and tell jokes. And it’s always a crap-shoot … who knows who’s gonna win?”

I guess that’s just what we’ll have to find out as the contestants get whittled down from 12 to four Friday at Third Base Tavern, and then the winner gets named July 23 at Saints (131 Breckenridge Parkway, $8, 7 p.m.).

“We try to take a different approach with it,” McCammon says of why comics come from several surrounding states. “It’s the hospitality of it, the people involved, the decorations, and the all-female love. A lot of people come back because they love the comics in Louisville, and they love that we’re all so close.”

“My plan is to be funny,” Meyers says. “I’ve been known to rough up a broad or two if they get too mouthy, but that won’t be a problem.”

In the end, this show fits into a niche the Louisville comedy community has been lacking — themed shows, which can often be vital to a scene’s growth. “In different cities there’s black shows, Puerto Rican shows, there are themed shows all over, all of the time,” Meyers says. “And I think that’s OK. Because, especially now, people really want to feel like they connect to someone.”