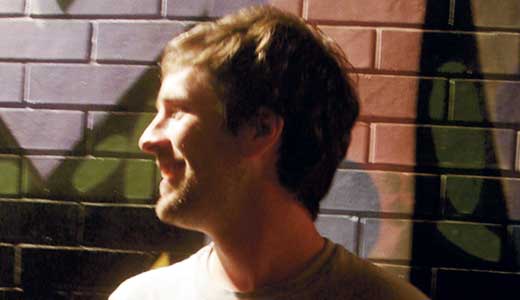 Mark Parris is one of those artists they don’t make anymore. With porn-star good looks, he’s a musician (who’s admittedly never listened to Zeppelin), a painter (who’s never been trained) and one of the most talented comedians in town — an all-around Renaissance man, but not the least bit pretentious. He’s a dying breed. He’s made countless highly praised cable appearances on networks like Oxygen, WOW, BET and Telemundo, and has shared the stage with some of the top comedians in the country. Parris will open for Etta May at Comedy Caravan this weekend.

LEO: Do you remember your first time on stage?
Mark Parris: Kind of. I remember a couple of the jokes from it. It was at Comedy Caravan, in the big room … around Thanksgiving ’06, I think. I made a joke about leftover casserole.

LEO: Did it go well?
MP: It went good enough to do it again. I didn’t invite anybody. I was so scared that it was gonna go real bad, so I just did it on my own. It was pretty intimidating, I’ve gotta say.

LEO: How do you know if you’ve written a good joke?
MP: I think a good joke has to make the audience think, to some extent. It has to be saying something. That’s the most satisfying to write, at least. I like surprising people, too. I think if you can do a good flip on people, that always feels good.

LEO: Are there any comics whose writing you admire that way?
MP: I think some of them have different styles than me, but Tim Northern has some really good one- or two-liners — I’ve always wanted to catch on to that. Dale Jones always goes up and kills it, but I could never do that, it’s not my thing. Well … maybe if you gave me six cups of coffee, two five-hour energy drinks and an eight-ball.

LEO: What’s been your worst experience on stage so far?
MP: I did a Fourth of July pool party — I’ve done a lot of bad gigs, but this one I had to make people stop playing volleyball in the pool. There was no stage. I had to cut the DJ music. And there were little kids there, little fat redneck kids. And … it was still light out. And that’s the worst, because you can see everybody’s face and they’re feeling so bad for you. Then I feel bad that they’re feeling bad for me, and it forms some kind of feedback loop that ultimately leads to bombing. I was leaving that gig, and one of the little fat redneck kids looks at me and goes, “You’ll get it one day.”

LEO: Does comedy inherently come from pain?
MP: I don’t think all comedy does. But I think comedy that ultimately serves a purpose to society has to come from some sort of pain or frustration. Pain sounds like such a negative word. But if you’re going to help people cope with reality, comedy can do a lot by taking the really bad and making something light out of it. If you’re going to really fix something or make someone feel better about something, it has to be a little more than fluff.