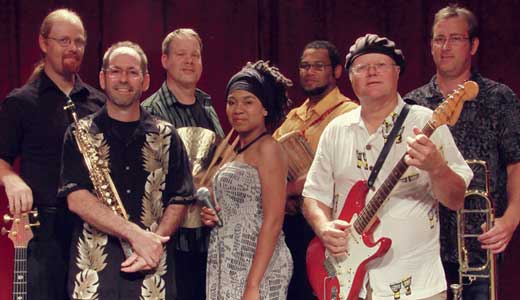 Coco Yam is an eight-piece ensemble whose reach encompasses a decade’s worth of history about Louisville music. Nearly every member is also in two or more other groups, ranging from jazz and rock to hip-hop and avant-garde. The band swelled to as many as 15 at one point, but has since settled into its current stable of eight.

LEO recently sat down with coordinator/drummer Gary Pahler and tenor sax/percussionist Yahya Johnson to talk about the recording of their debut album, due out later this summer.

“The music of Fela Kuti inspired me in the mid-’90s,” Pahler says, “and I was learning different styles of percussion. I began to wonder, ‘How can I create something like that in Louisville?’”

Johnson readily agrees. Having studied under the great Nigerian percussionist Babatunde Olatunji and playing in various Afro-Latin groups, he notes, “There’s so much more to pull from Afrobeat. The vocabulary is larger; everyone is a drummer. You have a 900-year tradition to study and follow.”

The earlier permutations operated under the names Ohun Afrobeat Band and splinter group Kyene Drum Ensemble. With members having such a diverse background of musical styles, Pahler says everyone brings a bit of their other work with them to Coco Yam. “Afrobeat’s not about anything smooth; it’s a gritty feeling … We each bring our different influences, phrasing” to the group, setting them apart.

The album began to take shape in the fall of 2009 at Downtown Recording Studio, with many of the demos leading to one-take masters. When lead singer Kelli Brodersen had to take some time off due to the birth of her child, the band took the opportunity to “expand beyond the nuts and bolts of Afrobeat,” incorporating some Daptone-style funk, Latin styles and a focus more on their own compositions. “The goal is to become all original, with just occasional covers,” Johnson says.

It’s certainly an endeavor to book shows for an eight-piece group, as is trying to make a living on 1/8 of a fee (just ask the Wu Tang Clan). “None of us are 19 years old,” Johnson says. “We have Monday-Friday ‘real jobs,’ so that helps.”

With eight people to accommodate, Pahler says, “We book out far in advance” for shows to allow for everyone’s schedules. They’ve been regulars at the Belvedere’s World Fest, played the World Equestrian Games, and are members of the Kentucky Arts Council Performing Arts Directory. In other words, you may learn something while you’re busy shaking your ass to the sounds of Coco Yam.