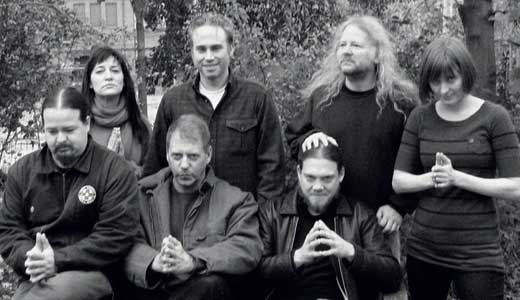 Since 1981, Chicago’s Cheer-Accident has been thrilling a loyal gang of followers with their fluctuating art-rock attack, often embellished by a rotating collection of some of the Windy City’s many fine and simpatico musicians. They return to Louisville to promote their 17th album, No Ifs, Ands or Dogs. LEO caught up with founder and drummer Thymme Jones.

LEO: How would you describe your music to someone who hasn’t heard you yet?
Thymme Jones: I’ve given up on that one. Literally, I just tell people, “You just kinda have to hear it.” I could just go the “blank-meets-blank-meets-blank” route, but a lot of people would just draw a blank on the blanks. Plus, I like to think the whole is much greater than the sum of its blanks.

LEO: Where do you find ideas for your songs?
TJ: Where I’ve misplaced them.

LEO: How do your surroundings inspire your music?
TJ: By keeping quiet.

LEO: Do you consider your group more of a rock band or experimental project?
TJ: Rock/pop/experimental in equal measure. And we measure often (way more often than we cut).

LEO: In the studio, how much do you try to capture your live sound? How free do you feel to experiment with sounds you might not be able to recreate live?
TJ: I consider the studio and live to be completely different animals. We feel 100-percent free to experiment with sounds we would never (in a million years) be able to recreate live. The word “recreate” is key here: I think what I like best about both live performance and the studio is, in either context, we are not really recreating, but creating. There are things that can happen with a live song, in terms of it being a real-time event with an audience, that could never happen in a studio setting. We may have played a song a hundred times, but we’re still making many varying choices (ostensibly, improvising within a given structure) each time we play it, and so it is a creative act. Conversely, we’re not recording a song in the studio merely so we can successfully recreate it at a later date — we’re trying to come up with something that makes sense in that moment, with those particular sounds.

So many contradictions, so little time! As you can see, the studio setting and the live setting are exactly the same in that they both involve interacting with the present moment, with little concern for subsequent re-enactment. However, we never feel any need to “capture” our live sound in the studio (“sound” isn’t the only aspect of “live,” so why bother?), and we never feel any need to “play the song exactly the way it is on the album.” Or, for that matter, play any of the songs on the album at all. I’m a big fan of context: Sitting at home listening to music is much different than being at a venue listening to music, so it seems like a good idea to treat the two quite differently.

LEO: What do you think of Louisville?
TJ: I love Louisville. Louisville used to love us. And then it stopped. But I think it’s going to pick back up with that idea again.