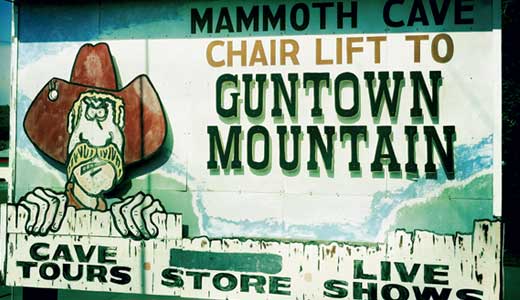 After traveling 45 minutes south on I-65, the car winds off of the exit ramp onto 31-W, and the first sign that we’ve truly entered Cave City literally rears its head high above my girlfriend’s Nissan: A 50-foot concrete dinosaur — an allosaurus, maybe, or a garishly painted tyrannosaur — advertising one of the town’s prized attractions, Dinosaur World, whose weathered, static beasts do more than anything to symbolize the kitschy mid-20th century Americana that permeates this unique Kentucky destination.

Indeed, it doesn’t take much dwelling in Cave City to feel the faint background radiation of a by-gone era, envisioning perfectly nuclear families mobilized in gleaming, chrome-fitted fleets of General Motors automobiles flocking here en masse, the spectacle of crudely rendered, pre-Jurassic Park dino statues serving as the highlight of a summertime jaunt in an age where the only comparable entertainment was a black-and-white television or, oddly, a good book.

Now, their paint flaking, their postures ill-informed by modern miracles in computer generated imagery, the inherent novelty of Dinosaur World pales in comparison with the modern-day theme park experience (which, for all of its Disney-inspired innovation, is also a victim of American society’s current predilection for solitary digital entertainments), and its stolid denizens remind me of a simpler time when boredom did not motivate pastime pursuits, but rather the simple pleasures associated with intrastate travel.

Pulling right onto 31-W, we drive less than a mile and park in the gravel lot of Joe’s Diner, our bellies grumbling. Although the pulled-pork sandwich is a sauce-slathered mess, the establishment’s accompanying mini-golf is a blast. Featuring larger-than-life effigies of the Blues Brothers and an anthropomorphic hot dog spraying itself with faux-mustard, my girlfriend and I relish 18 holes-worth of unadulterated analog fun.

After skipping out on the greens of Joe’s Diner, we check into our motel, Wigwam Village, one of a dozen concrete “wigwams” constructed in the heyday of U.S. day-tripping, now just one of a handful left. Consisting of a dozen 15-foot-high concrete, teepee-like structures arranged in a half-moon along Dixie Highway, the Native-American-themed business is, somewhat ironically, owned by extremely courteous Indians, who also sell a wide variety of American-Indian tchotchkes. Rates were pretty decent, too, and we only paid $65 for one night in the summer season.

After so-so flautas at El Mazatlan and a cheap but tasty pitcher of margaritas, we packed it in early that night. The next morning, we embarked on a trek to nearby Kentucky Down Under, home to an array of Australian creatures — myna birds, kangaroos, wallabies and non-baby-eating dingoes. Under a brutal sun, we toured the facility for a couple of hours, mistakenly partaking in homemade fudge samples offered by the gift shop, and forewent the park’s own cave tour.

Oh, right: the caves. The city is home to famous Mammoth Cave, operated by the Kentucky State Parks, and is the world’s largest contiguous network of underground caverns whose miles of under- and above-ground trails were more than we could handle.

After washing kangaroo fur off my hands, we went to Big Mike’s Mystery House, a venerable tourist trap in the purest meaning of the word. Selling all manner of useless trinkets, from Cave City T-shirts of every imaginable design to polished chunks of faux obsidian dubbed “Apache Tears,” Big Mike’s has something for everyone, especially if that person suffers from the condition known as hoarding, or, if you’re like me, you’re a cheap date: For $1, you get a personally guided tour through the mystery house itself, which consists of various optical illusions (felt paintings under ultra-violet lighting, geometric shapes) presented inside a building constructed at what appeared to be a 30-degree angle. Words cannot describe how awesome this is.

For the more adventurous, there’s Guntown Mountain and it’s regularly occurring street gunfights and saloon shows, all of which takes places in a mock ghost town atop a hill accessible only via ski lift. And, for the so-adventurous-it’s-criminal, there’s the Golgotha Mini Golf Course, a Christian-themed putt-putt course that has been closed but, according to those in the know, is easily accessible to pious individuals who would risk a charge of trespassing.

Rounding out our trip was the Mammoth Cave Wax Museum, featuring likenesses of various predominantly American historical figures, from George Washington to Daniel Boone, Richard Nixon to Elvis, the museum is a delightfully tacky automated tour featuring a looping audio tape timed with each display. (The best is Dolly Parton’s display, which plays her No. 1 “Love is Like a Butterfly” that, when combined with the low-key lighting and sparse attendance, makes for a perfect impromptu make-out session.)

Unfortunately, the owner of the museum, an older white-haired woman with an oddly wax-like appearance, is looking for someone to buy the museum. She’s proud of the museum, of its history and what it means for Cave City, and is waiting for the kind of buyer to come along who understands this.

“Did y’all go to the taxidermy museum?” she asks. We shake our heads no, lamenting that we didn’t have time to squeeze the Mammoth Cave Wildlife Museum and it’s 1,000-plus exhibits into our truncated schedule.

“They’ve got a great museum,” she says. “Y’all’ll just have to see it next time you come back.”

We nod yes and head out onto the sun-baked gravel parking lot, pointing the Nissan north onto I-65, traveling out of the past.