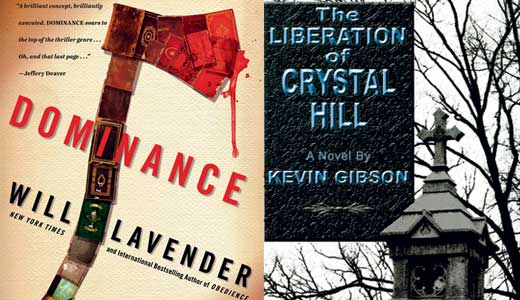 There’s a pair of readings coming up this week where proven local talents show off what’s new — and you might get a shiver or two.

Kevin Gibson — whose reliable byline has graced LEO and other periodicals around town for a long time — is presenting his first novel, “The Liberation of Crystal Hill.” The reading/signing will take place at A Reader’s Corner (at its new Clifton location, 2044 Frankfort Ave.) on Saturday, July 9, at 1 p.m.

The book’s plot has mysterious events disturbing the residents of an Indiana town. Family and community become frayed as fear takes hold. Gibson’s young protagonist finds he must deal with specters more dangerous, and closer to home, than the ghost of a Civil War hero.

Gibson’s portrayal of the spookier and more contentious sides of small-town life includes evocative scenes in a cemetery. Gibson tells LEO that this setting was inspired by a visit to one in New Albany — “a very old cemetery that’s kind of out of the way. It has in it a number of unmarked pauper graves, and also some graves of people who died many years ago in a steamboat explosion.”

The path to publication for this novel is one many aspiring writers can relate to. “The Liberation of Crystal Hill” evolved as an expansion of an award-winning short story Gibson wrote in the 1990s. He completed a book-length manuscript not long after — but when no publisher could be found at that time, he set the work aside for about a decade. “I got it out again three or four years ago and did some rewrites,” he says. “Then a good friend of mine introduced me to Bearhead Publishing — a grassroots company that helps budding writers get their stuff out there.” As he enjoys the good notices and feelings of accomplishment from finally getting this work into bookstores, Gibson is already back to the keyboard — and his next subject, he says, is zombies.

Will Lavender is out to promote “Dominance,” a twisty thriller that’s similar to his successful 2008 debut novel “Obedience.” He’ll be at Carmichael’s (2720 Frankfort Ave.) on Thursday, July 7, at 7 p.m. LEO reached out to The New York Times-bestselling author and found him at the Fern Creek Library. (“For the life of me, I can’t write at home. I have two small children, and they don’t really understand plot resolution and character arcs.”)

Despite such pressures, early reviews say Lavender’s new hardback delivers the goods once again. In “Dominance,” a literature professor who’s in prison for two murders is given the chance to teach again via webcam. He has his new students consider his favorite subject — a famously reclusive author — and then gets them involved in mysteries that might eventually lead to winning the professor’s release. But mayhem enters the scenario when a body turns up — presented in a tableau featuring the novels of that enigmatic author.

Inventing a peculiar author among the characters is a particularly playful move — as Lavender himself began his writing career creating experimental pieces that were far removed from psychological thrillers. His own view of the contrast is this: “I used to think of myself as an artist; at a certain point, I made the decision to try and write fiction that’s entertaining above all else.”