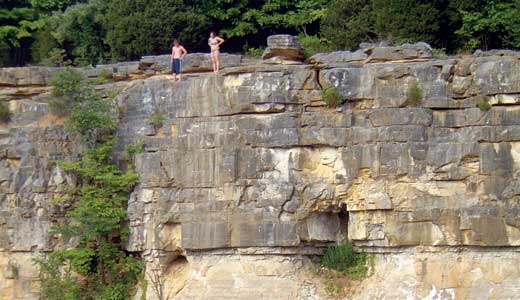 Pointing a camera at a television and leaving its exposure open for the duration of Nicole Kidman and Hugh Jackman’s sex scene in the movie “Australia” creates ethereal, gauzy, pixilated art. I learned that within minutes of arriving in Bloomington, Ind., a town full of pleasant surprises.

The aforementioned photograph is part of an on-campus art show exploring themes of sex, reproduction and gender. At the front door hangs an image of a woman underwater struggling to surface for air. Her electric blue high-heels strain sensibility and movement.

The show, sponsored by The Kinsey Institute, brought together 100 works from all over the world: sculpture, paintings, a gold-framed black wig with a vaginal peep hole that, when peered through, showed a video of a furry (look it up if you must) wearing a frilly dress lolling on a swing.

Sure, this kind of quirk is expected in college towns like Berkeley, Calif, or Austin, Texas, but those are metropolitan areas. Bloomington has a population of roughly 80,000. Indiana University is its spine.

Bloomington’s main square is home to independent bookstores and record shops. IU has an impressive art museum that’s unfortunately closed for renovation this summer. Indian, Asian and Mediterranean restaurants sit along compact downtown streets. One of the most beloved restaurants, Snow Lion, has ties to the Dalai Lama’s brother, who lived in Bloomington and created the Tibetan Mongolian Buddhist Cultural Center.

I confess, my Bloomington love started years ago. I’m an Indiana University alum. Proud of it. So trips back are a blissful blend of nostalgia and exploration, as much has changed since my day. And summer is, in my opinion, the best time to visit.

One can stroll IU’s well-manicured campus in relative isolation: patches of red and white flowers, regal limestone buildings, even an idyllic little creek.

We walked from the art show to downtown in 15 minutes. We lucked out to find the annual Taste of Bloomington under way. A crowd of several hundred didn’t keep us from zeroing in on jicama and mango salad and curried potatoes. We’d planned on dinner at Bloomington’s popular Upland Brewery, so snacking ceased. But the Taste’s most indelible memory had just taken the stage.

The sparkle from silver-studded belts and safety pins holding together fishnet stockings lured us. A kick drum read: Hairbangers Ball. The lead singer’s belt read: Rock Star. An ’80s and ’90s hair metal cover band? We decided to give it two minutes. Thirty minutes later, I was gasping at the band’s dandy mimicry of Poison.

It felt odd — holding a delicate bamboo bowl of thinly sliced organic produce while watching the committed hip thrusts of a 30-something singing “Talk Dirty To Me” as he winked at a gaggle of adorable teenage girls. Such is the beauty of summering in Bloomington.

While we didn’t follow Hairbangers Ball to their next gig at The Bluebird, a popular live music bar, we did end up at The Bishop, a two-year-old music venue that’s taken over as B-town’s spot for live indie music. I must admit my knowledge of bars beyond that is limited. Not turning 21 until the second semester of my senior year and garden-variety collegiate nerdiness are to blame. I can tell you Kilroy’s on Kirkwood Avenue is still probably the “frattiest” bar, where bouncers are called “KOK blockers.”

If you’re looking for nature, Brown County, known for its lush, generous hills, sits right outside Bloomington. I swear when we drove through, all the Bed and Breakfasts saturated the county’s air with the smell of fresh cinnamon buns.

Ten years ago, I leapt from a perch about the height of a four or five-story parking garage. Somewhere in my two second descent, I must have hesitated or jerked in fear. Rather than entering the water like a missile, I smacked it in more of a lawn chair position. Luckily, I walked away with only a newfound fear of heights, a respect for mortality, and bruises from neck to ankles.

I had forgotten how to get there (or purged it from my memory), but natives pointed us in the right direction. Upon arrival, we encountered a group of pasty teens and crushed beer cans. A girl in a tiny string bikini and cutoffs stood on the highest jumping point, her friends cajoling her to “do it.”

She started forward and hesitated. I cringed, wanting to yell out to her it wasn’t worth it.

But one of her friend’s had another piece of advice.

“Don’t rip open your twat!” a boy yelled. Before the words could echo off the limestone, she jumped. So, that’s on Bloomington’s outskirts — should you choose.

All this is just 1 hour, 45 minutes away. I suppose you could drive the same length of time to experience Bowling Green, but why would you?