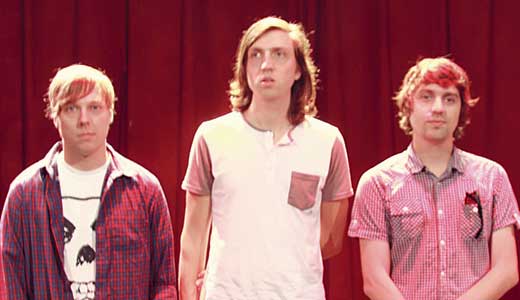 Aaron Chadwell and Alex Bell started OKDeejays in 2008, and since then the duo has spun tunes at local clubs, bars and events, and also brought visiting DJs and bands through town, finding common ground between Louisville’s mods, rockers and mockers. This year saw the debut of their new radio show, “Night Visions,” on WFPK, 91.9 FM, which finds the OKs joined by fellow DJ Sam Sneed, each Monday through Thursday night between the unholy hours of 1 and 2 a.m.

Aaron Chadwell: ?Sam Sneed and I got together in 2004. We both had pretty packed weekly residencies at that time — mine was on Wednesdays at the Frankfort Avenue Beer Depot (FABD) and Sneed’s was on Thursdays at North End Cafe. We decided to join forces to pack out various clubs around town. I met Alex in 2007 and formed OKDeejays shortly thereafter due to our mutual love of house music pressed to wax.? My goal for “Night Visions” and OK Productions is to expose folks in Louisville to a wide variety of music they may not otherwise get to hear or see live. This summer is going to be huge for OK Productions — we’re bringing a slew of great live acts and hope the shows are well received.

Alex Bell: ?I first started getting into dance and electronic music right when I was getting out of high school ?in early 2000. I started listening to more and more? electronic, disco, dance and new wave types of music throughout college, when I was first urged? to start DJing and share my taste in music. I started DJing full-time in 2008, as well as joining forces with Aaron to form? OKDeejays.

Sam Sneed: ??I met Aaron back in the early zeros. Aaron would have shows and rad parties at his house, and around that time I was constantly DJing around town. Aaron had a weekly gig at the FABD and asked me if I wanted to come out and play some records. We have steadily been DJing together ever since.

We ended up throwing a monthly party called TGIV (Thank God It’s Vinyl) with Alex Bell and Matt Anthony. To promote TGIV, we would do guest spots on Matt Anthony’s WFPK radio show, “Sound Clash.” Alex, Aaron and I were really stoked to do radio and became students of Matt Anthony. This is how “Night Visions” pretty much started.

My goal for “Night Visions” is to constantly keep the show fresh by showcasing emerging artists and, most importantly, have fun with the show. Syndication at some point would be awesome, but I am just happy to be part of the WFPK posse.

INFLUENCES
AC: My main DJ influences are Aeroplane, due to their amazingly smooth chart mixes that they release on a regular basis; Bottin, because of his undeniable Italian grooves; and pretty much anything released on DFA Records. ?

AB: My first influences, in this genre of music, were producers such as Fatboy Slim,? Chemical Brothers, Aphex Twin, Underworld and Daft Punk. My influences now include? contemporary dance and house music producers such as Bottin, Aeroplane, Erol Alkan and ?Soulwax. I am also a huge fan of ’70s-era disco and ’80s-era new wave and dance.?

SS: My core influences are The Clash, The Sonics, ESG, Primal Scream, My Bloody Valentine and The Jesus and Mary Chain. Currently, I have been obsessing over Gang Gang Dance, Deerhunter, Black Lips, The Horrors, OFWGKTA and Zomby.

A calendar of OKDeejays and OK Productions events is available at www.nightvisionsradio.com.