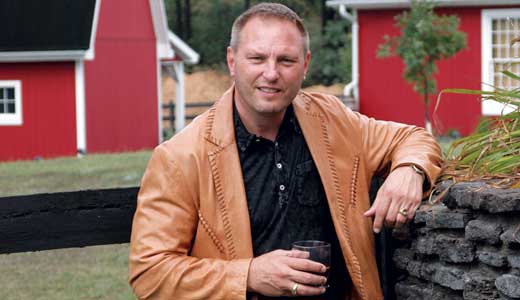 I never really set out to become The Bar Belle, I just followed my passion and this is where it led me. My mom is quite proud (thank God they don’t have LEOs in Ohio). In much the same way, stand-up comedian Bernie Lubbers found himself with a title so awesome, I kinda want to steal it: Professor of Whiskey. He’s got a new book titled “Bourbon Whiskey,” in which he talks about all things bourbon and couples the facts with funny stories from his childhood and travels. I caught up with him the other day, and we talked about our true loves — bourbon and Bon Jovi. (BTW: Lubbers has a reading/signing on Tuesday, July 26, at Carmichael’s on Frankfort Avenue at 7 p.m.)

Bar Belle: Whose bunghole did you have to Twitter to get the title of “Whiskey Professor”?
Bernie Lubbers: It’s the coolest job in the world for sure. It didn’t exist at Jim Beam until the brand manager of Knob Creek got with me and created the job five years ago. You grow brands eyeball to eyeball, but you have to educate folks about it in an in-depth but entertaining way.

BB: How far do you travel to teach people about bourbon?
BL: I log over 100,000 miles a year across the U.S. mostly, but I’ve been to Brazil, Greece and the U.K. (not the university, but the U.K. as in England and Scotland).

BB: Got it. Can you be bribed with fine bourbon?
BL: It’s hard to bribe me with bourbon, since I’ve always got a bar full of it in every city I go to, but hell yeah, I’m always up for a fine bourbon!

BB: What was your inspiration behind your book?
BL: When I started this position, I quickly found out there are a lot of people who really don’t know a lot about bourbon. There’s also a lot of misinformation out there. I’ve always been a big fan of Louisville and Kentucky, and showing off my favorite places — that’s in my book, too, a nice guide for folks coming here to visit the distilleries. And it’s not just the obvious places, but the fun neighborhood bars — like the Back Door and Cahoots.

BB: I know the Back Door intimately. Anyway, tell me something I don’t know about bourbon.
BL: You probably don’t know that in 1964 under Lyndon B. Johnson, Congress declared bourbon as a distinctive product of the U.S. As a result, bourbon is the native spirit of the U.S. and can only be made here. So not only is it delicious to drink bourbon, it’s your patriotic damn duty to drink bourbon!

BB: That’s what I tell my mom every Thanksgiving. So what’s your favorite bourbon?
BL: My favorite bourbon is the one I have in my hand at the time, but my first favorite was Old Grand Dad. It’s a high rye bourbon — nice and spicy and just gorgeous, plus you can’t beat the price.

BB: If you were on a cruise ship off the northern coast of Alaska and the bar ran out of bourbon, what would you order?
BL: Tequila. I love sippin’ on El Tesoro Reposado and a good paloma with Hornitos.

BB: Bourbon and Bon Jovi both start with a B. What’s your favorite BJ song?
BL: I’m a sucker for a ballad, so gotta go with “Always.” I play guitar and sing with Robbie Bartlett once a month or so at Diamonds in St. Matthews, so we might have to work that one up for our next gig there (Sept. 1).

BB: Would you challenge me to a drinking contest, Professor?
BL: Never! I’ve heard stories about your abilities, Sara, but how about a bourbon trivia challenge sometime?
BB: No thanks: I drink it, not think it.