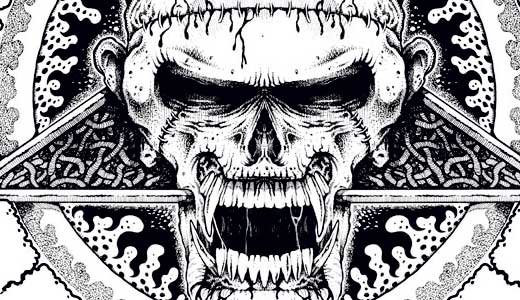 I attribute most of what contentment I have with the modern world to the DIY school of thought that emerged with the punk scene around 1976. The idea that one had to be classically trained and well-schooled, following the rules of what is “right,” began to fall away for some who realized that the Ramones had a lot more soul than what was being taught. Heavy metal also emerged in the ’70s, quickly forming not just a sound but also a visual language, one built around Satan, evil swordsmen and other nerdboy turn-ons. Some artists, like Pushead, illustrator of Kinghorse’s debut album, have earned fans worldwide for their work in heavy metal and punk art (the documentary “Beautiful Losers” is a good primer for similar talents), and Louisville’s Jeff Gaither — born in 1960, so 16 in 1976 — is another notable figure.

The Tim Faulkner Gallery has given Gaither the month of July for a show of his own, “Frequent Mutations.” Though the Speed’s current quilts show has its merits, Gaither’s work speaks more directly to my ever-petulant teen boy heart. He has created hundreds of album covers, from G.G. Allin to Guns N’ Roses and beyond; a couple thousand magazine covers (including LEO); the omnipresent Forecastle Festival posters; as well as skateboards, clothing and what have you. His work also covers a similarly “lowbrow” interest in horror. Sal Canzonieri of Electric Frankenstein said, “Jeff is able to show a sense of humor and a strong connection to the cherished cultural imagery of our youth that draw you into his wild and wooly illustrations.” The Faulkner teases that “the entire gallery will be decked out Gaither-style with work in all of our main rooms plus a few surprises,” so wear an adult diaper.

The exhibit continues through July 31. The Tim Faulkner Gallery is located at 632 E. Market St. Go to www.timfaulknergallery.com for details.