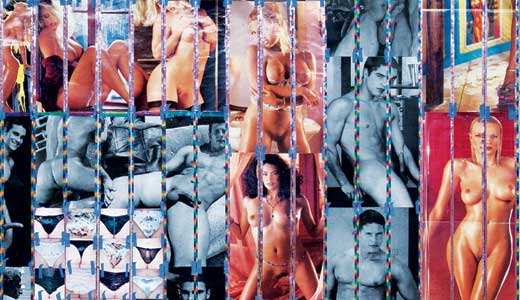 Why is it that when the tomatoes get good, the art shows tend to get bad? It could be blamed on a variety of factors: People stop answering their cell phones and go out of town, and audiences evaporate from galleries in search of more pastoral settings. This is why the “Summer Heat” show at Land of Tomorrow Gallery is such a solstice surprise — a thoughtful, well-curated show in the middle of the dry season.

The show, which looks at depictions of sex and sexuality, is called “Summer Heat” as a tribute to the season and the contemplation of all things sexy. Gallery director Joey Yates explains that he wanted to have a summer show precisely because he saw it as a gap in the calendar waiting to be filled with something peculiar and interesting. Taken as a whole, the show strikes a nice balance in its treatment of the subject: the terrain between burgeoning sexuality and fetish, fantasy and reality, and the look and feel of sex.

In Stephen Irwin’s “Tracing,” pornographic magazine images have been abraded with steel wool in order to subtract the illicit aspects of the images. What is left — a pair of embracing arms in a fog of white space, or a random arm emerging as if through a veil — make the implied more intriguing than the revealed. This modest treatment of the subject is contrasted with the explicit nature of Arturo Alonzo Sandoval’s quilt “Very PC,” a tapestry of paper-printed pornographic images woven on the scale of a bed quilt. From 20 feet away, it would be easy to mistake its patterns for conventional quilts popular with grandmas everywhere, but from close-up, it is something entirely different — as if a quilt could act like a dream-catcher absorbing all the thoughts one had under it.

Gender bending and fantasy are also aspects of Bryce Hudson’s diptych — two images from African-American publications Ebony and Jet, one of a female figure draped suggestively in a fur stole, the other of a rippling muscle man whose face is superimposed on both figures. Surprisingly, his face seems perfectly at home on both bodies, leaving us to question which gender it might actually more authentically belong to.

Objects and depictions of the feelings of sex are balanced against work showing the look of sex. Daniel Pfalzgraf’s painted triptych seems at first to be a woman, then as you travel the length of her body from head to toe, she appears to be part dog, part cat or wolf, the final panel showing her tail wagging in frenzied motion. Russel Hulsey’s “Wash Cycle” also seeks to assign a visual metaphor to the sexual experience — a man and a woman are depicted in a deluge of water they cannot escape.

Yates says the exhibit was inspired by the Kinsey scale of human sexuality; he wanted to try to include things from all over the map of human sexual experience. Titillating, ridiculous, mundane, cringe-worthy — it’s all here. One piece, Louis Zoellar Bickett’s single iron bed and accompanying highchair covered in teddy bears of various shapes and sizes with ear tags documenting what “Daddy does to teddy” still baffles me. Is the work about the gay “bear” subculture, or something much more disturbing?

I guess it is possible to know that something is compelling even without knowing exactly why. “Summer Heat” offers no new thesis about sexuality, but puts together many thoughtful and well-crafted works on the topic. Because sexual experience is so personal, I cannot venture what you will think about the show, but I think it is certainly worth the effort to find out. As Matthew Bradley, exhibition manager and co-curator of the show, said with a good-natured laugh as we walked out of the gallery, “If you can’t handle it, don’t come. Or at least don’t bring the kids.”