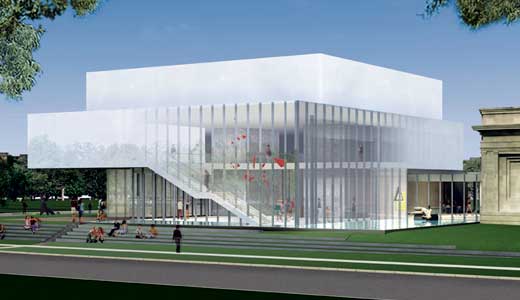 Construction is a way of life around the University of Louisville. Third Street near Cardinal Boulevard is yet again full of orange cones, chain-link fencing and earth-moving equipment. There’s enough dirt and noise to alert you that something is up. But this time it’s not U of L, it’s the Speed Art Museum.

The Speed has officially begun a $79 million renovation. The start is small — rerouting the curving road leading to the garage. It should be completed by the time the fall semester starts in August.

Kulapat Yantrasast, with partners Richard Stoner and Yo Hakomori, of wHY Architecture, plans to take the original 1927 building, with its many additions, firmly into the 21st century to give Louisville its latest piece of destination architecture. The two new buildings, piazza and art park will enlarge the museum to 200,000 square feet, with much-needed additional exhibition areas for the museum’s permanent collection and special shows.

The first section of the three-phase expansion, a dramatic glass building to be built to the north of the existing museum, should be completed by 2015. “Our approach is to honor (the Speed’s) historic structure and to rejuvenate its spirit for the future while creating a new facility that reflects and enhances the vibrant cultures of Louisville today,” Yantrasast says. “By opening up the museum in all directions, I want to make everyone surprised and curious — allow all to see what’s happening inside and to draw them into the dynamic experience inside.”

The completion dates of the other two phases (renovation of the current museum and the building of another structure to the south) haven’t been determined, but it is expected to take at least a decade. The museum is planning to stay open during construction.

The renovation is being carried out in an environmentally friendly fashion, and wHY Architecture is applying for the U.S. Green Building Council’s LEED certification.

“Watching the Speed’s expansion unfold is very, very exciting,” says director and CEO Charles Venable. “The staff and trustees have been planning for this moment for a long time, and at a recent board meeting, it was a treat to see the smiles on everyone’s face when we took a tour of the site to discuss how the leading edge of this multi-million-dollar project would unfold. Since then, we have demolished Robbins Hall to make way for our new art park and driveway. Once the new entry drive is completed later this year, everyone will know that the future is truly upon us.”

The museum recently donated 100 tons of limestone from walls that surrounded the current building to the Olmsted Parks Conservancy.

You can glimpse the Speed’s thought process with the exhibition “Unveiling the New Speed: A Model of the Future,” on display through March 11, 2012. It features a large model, virtual tour and many architectural drawings. The master plan shows the scope of the project, heralded by the museum as “the largest capital project ever undertaken by an arts and culture institution in Kentucky.”

For more information, go to www.speedmuseum.org.