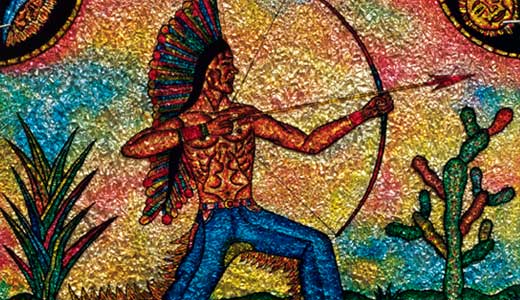 Currently on display as part of the “Cuba Now” exhibit at 21c Museum Hotel, Alberto Casado’s paintings are luminescent and bold, reminiscent of stained glass or the glowing golds of Byzantine artwork. But they are made from materials you’ll find in most homes — ink, foil and glass. To create these works, Casado has employed a technique known as tinsel painting. Some claim the practice originated with the ancient Egyptians, who used precious gold leaf to back important paintings, but, over time, as metals became affordable, the process became popular in ordinary households around the globe.

Tinsel painting was especially popular during the 19th century as a way to mimic the ancient art of Asia and Egypt. Often schooled in ornamental arts, Victorian women created flower paintings, botanical scenes and religious depictions utilizing paper, silk, velvet and foils to enhance their work. Many of the ornamental arts, including tinsel painting, fell out of fashion as mechanical reproductions became widely available. But, even though it was no longer formally taught, the process remained popular with self-taught artists. Because of this, the finished pieces were labeled as “crafts” rather than art, so even the best tinsel paintings were not seen in art galleries or museums.

But today, some contemporary artists, such as Casado and his peers, are utilizing these old-craft techniques. The processes, combined with Casado’s use of inexpensive and reused materials, add to the meaning of his work. For many people, producing crafts is a way to champion self-respect, entrepreneurship and empowerment while standing against mass production, corporate capitalism and anonymity. The rise in folk-art techniques facilitates an exchange between upscale contemporary art and working-class crafts.

This use of unconventional materials also connects contemporary Cuban artists to the Arte Povera movement of the 1970s. “Arte Povera” was coined in 1967 to describe a group of Italian artists who embraced limitless experimentation with supplies and processes. In the same way, Cuban artists’ investigational works are underscoring art’s relationship with everyday life, using experimentation to address cultural issues such as censorship, racism and oppression.

“In the Arte Povera tradition, many contemporary Cuban artists use found objects as an expression of individuality — something that has not been encouraged by the Castro regime since the 1959 revolution,” says William Morrow, director of the 21c Museum. “Similarly, many of the artists in the current exhibition use unconventional materials — Glenda Leon uses chewing gum, Roberto Diago uses building scraps taken from the ever-growing shanty towns on the outskirts of Havana, and the artist duo Guerra de La Paz reclaims used clothing to make their elaborate sculptures.”

Many of the artists in the “Cuba Now” exhibit trained at Insituto Superior de Arte, also known as ISA. Comparable to the conservatory experience in the United States, the ISA teachers are working artists. The professionalism of the staff, combined with the vigorous expectations of the student body, has elevated the school’s reputation; it is known as the best art school in Cuba. Formerly the Havana Country Club, the school is a stunning example of architecture prior to the Cuban Revolution. With the collapse of the Soviet Union, the artwork produced at the school became increasingly critical and political.

Coming out of ISA, Casado is a skilled painter with a strong academic background. He chooses to use the folk-art technique of tinsel painting to bring the issues of his Afro-Cuban experience to the white walls of contemporary art galleries.

“His formal training would have prepared him for more conventional mediums of art. However, Casado lives and works in the township of Guanabacoa, across Havana’s bay. Little has changed in this predominately Afro-Cuban community over the last century,” Morrow explains. “It is his family’s long history of participating in the sacred society of Abakua religion, which blends Catholic and African traditions, that influences many of his glass works. Casado’s intricate paintings adopt the craft tradition to create a complex blend of Abakua symbolism with humor, politics, history and contemporary Cuban culture.”

Sometimes an old trick is the newest thing. Casado’s paintings are fresh and vibrant, challenging the viewer to make one of their own. Yet, as original as they are, they balance delicately on tinsel painting techniques and the ideals of Arte Povera. It’s a refreshing reminder that history isn’t behind us. It’s happening right now.