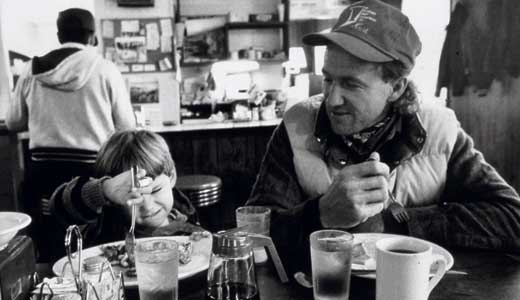 The Carnegie Center for Art and History in New Albany is a quietly elegant building. The outside is red brick, and walking inside, you find yourself between two white-walled, gray-carpeted rooms surrounded by faux-marble Grecian columns leading to a white arched ceiling and skylight. The simplicity of the building is a perfect complement to its newest exhibit, contained in framed photographs in the two front rooms: “20/20 Vision: Travels Along America’s Accidental Highway.”

The exhibit, by mother-daughter pair Jan Albers and Karen Titus, is a series of photos taken along U.S. Route 20 between 1989 and 1995. Route 20 is the longest transcontinental highway in the United States, beginning in Boston and crossing through 12 states before ending in Oregon. The exhibit showcases photos from 11 of the 12 states. Route 20 was not originally planned to be a connected road; it was a series of smaller roads that eventually were joined to make a highway (inspiring the term “accidental highway”).

The beauty of the exhibit is found in its universality. The photos display unfamiliar locations with familiar implications — parades, town squares, farms, cemeteries, diners. They show the common aspects of numerous towns that line the highway. “Since it’s a collection of main streets as well as a connected, coast-to-coast highway, Jan and I explored common themes in small-town America, including a sense of community, celebrations and loneliness,” Titus says.

This aspect of the exhibit is what attracted curator Karen Gillenwater to working with the photographers. She says viewers can make a connection with this exhibit and find that they may have more in common with each other than they think. “People will find something familiar to them, something that sparks an interest or sparks a memory,” she says. “I hope they find something personally meaningful.”

Hoosiers may find something meaningful, as Indiana is home to a portion of the highway. There are photos on display from three Indiana locations: Elkhart, Middlebury and Shipshewana. One of these photos touches on a theme that is more prominent than ever in an economic recession: the loss that accompanies change. The photo from Elkhart is of a father and his young son eating at a small-town diner, which was the hub of the town at the time. Today, this diner no longer stands, and the viewer is left wondering what happened to the family in the photo.

Changes of the times are evident in the journey and the process as well, according to Albers. “It was without GPS, before digital cameras, laptops, cell phones, shot on film now extinct,” she says. The women didn’t know how their photos would look until they went home and developed them — leading to multiple trips along the highway to produce the photos.

“Although we didn’t cover the road in one fell swoop, I think the idea of a road trip also emerges in the photos,” Titus says. And with the help of the Carnegie Center, viewers can also express their idea of a road trip. Behind the reception desk is a map of the United States, inviting visitors to post photos of their own travels on the corresponding spot on the map. Participants can post photos to the center’s Facebook page as well; employees will then print and attach them to the map.

Perhaps looking at the exhibit and the mapped photos will inspire a road trip of your own down America’s accidental highway.