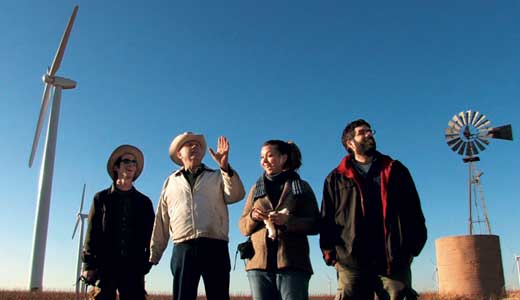 Chugging across the country in an SUV would seem anathema to most environmentalists, but this American-as-apple-pie pastime is exactly what sets the film “Yert” (Your Environmental Road Trip) apart from others in the eco-doc category. Louisvillians Julie and Ben Evans, along with producing partner Mark Dixon, spent one year crisscrossing the United States in search of climate change solutions, or what the film refers to as “the good, the bad and the weird” of the green movement.

Their vehicle of choice — a 2006 Ford Escape Hybrid — as well as the decision to depart and return on the Fourth of July, offers some indication of where team “Yert” is coming from.

“An environmental road trip is kind of an oxymoron. And it should be,” says Ben Evans, who considered bicycles and other modes of transport for the project, but, in the end, wanted to reach those who hadn’t yet been reached.

“We wanted to find a way in with people who might not talk to you if you were driving a Prius,” adds Evans.

To help offset the SUV’s larger carbon footprint, the production confined itself to one cereal box full of garbage per month, hauling the trash with them on the yearlong journey. This is admirable, but what makes “Yert” go is not its do-gooding. The film’s realistic expectations and approachably affable hosts create an easy, often comedic tone. We are mostly spared the severe narration, lecturing climate scholars and dour eggheads typical of the genre, instead receiving a fresh look at an issue that has long since passed its numbing point.

Dixon and the Evanses are comfortable on-camera and seem to be having the times of their lives. (Ben and Julie are trained actors and it shows.) Their “bees with honey” approach to solving climate change is one the filmmakers hope will lure in the dubious. And it just might work.

An entertaining visit to a 600,000-square-foot playland constructed entirely of found objects and industrial junk is more fun than preachy. Seeing such a wide array of trashed materials recycled into an amusement park should get viewers thinking: Is there really such a thing as garbage anymore?

During the 50-state voyage, the “Yert” team explores a number of places like the City Museum in St. Louis. But what brings the most weight to their cause is when things get personal. Particularly when, three months into the trip, Julie announces an unexpected pregnancy.

The reveal comes as a shock, considering that doctors had informed the Evanses they would not be able to conceive. Now they were predicting a delivery date of — when else — July 4. Ironically, their perceived inability to conceive is what furnished the couple with the motivation (and window of opportunity) to embark on their adventure in the first place.

The good news created momentary challenges to the project. But it soon became clear that the benefits of this new plot point far outweighed its obstacles.

“The good thing is (the pregnancy) personalized and crystallized a lot of these issues in a way that, had it not happened, I don’t think would’ve been as memorable,” Evans says. “Suddenly, these issues go from being an intellectual concern to a very real, gut-level concern. For us, nothing drove home the issue of planetary stewardship more than bringing a child into the world.”

The pregnancy also reminds us that we’re watching real people, not a collection of talking points and inconvenient factoids. Although the motivation driving “Yert” is partly political, it’s just partial. As Evans puts it, he and his partners don’t claim to know all the answers, and this is precisely why they set off into the country — confused, concerned and hoping to
find clarification.

Having been there and back, I asked Evans the question posed throughout his documentary: Are we doomed? After a chuckle, the filmmaker recalled David Orr’s response to the same query. Orr, an environmental studies professor at Oberlin College and author of eight books on the subject, replied that the best answer rests somewhere between yes and no.

Orr figures that if we believe we’re doomed, we’ll throw up our hands and do nothing. At the same time, if we believe we are not doomed, we’ll breathe a sigh of relief and still do nothing. It’s when we aren’t sure that action is most likely. The Bioneer Award winner refers to this uncertainty as the sweet spot — or hope. And, for Orr, “Hope is a verb with its sleeves rolled up.”

Listening to Evans recount this meeting, it’s clear the professor’s words have resonated.

“YERT” will show at 9:15 p.m. on Thursday at the Louisville Science Center’s IMAX Theater, which has added a second screening to the night’s already sold-out bill.