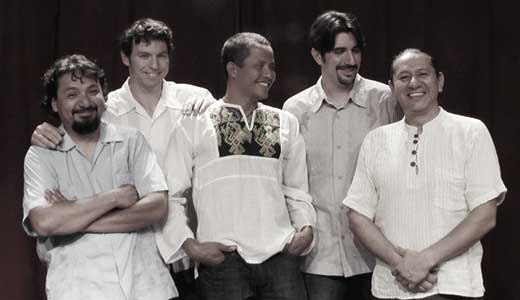 Appalatin is an accidental band that, in all likelihood, never should have become a reality, at least not in Louisville. How six guys found their way from all over the world to meet here with a shared love of Latin music and mountain folk is serendipitous, indeed.

Marriages, work and family are what lead most outsiders here, and the players of Appalatin are no different. Steve Sizemore, a percussionist, arrived in town via graduate school and a job. Yani Vozos (guitar, mandolin, charango, vocals) has a Louisvillian mother, so he’s the one native in the group. Luis de Leon (harmonica, güiro, maracas, percussion) hails from Guatemala, Marlon Obando Solano (guitar, vocals) grew up in Nicaragua, and Mario Cardenas (bass) and Fernando Moya (charango, quena, sampona, quenacho) share Ecuadorian roots.

Vozos, Solano and Sizemore were the nucleus, each meeting soon after arriving in town. The sextet became a cohesive unit in 2006, and Appalatin began to hone their craft at Heine Brothers Coffee.

“Marlon is a gifted artist, a jewelry maker,” Sizemore says. While exhibiting at the Kentucky Museum of Art and Craft, he met one of Heine’s managers, who offered the band an ongoing gig at their Douglass Loop location.

“That opportunity helped us build our sound and repertoire,” Sizemore says. “We began sharing songs, and little by little, started introducing songs to each other.”

Described on the band’s website as “a fusion of Latin and Appalachian folk music from the band members’ homelands in Central America, the Andes and Appalachia,” Sizemore says people were fascinated by the sound. “A year and a half ago, we came to the point of asking ourselves if we’re serious. If we are, let’s record,” he says.

The album is filled with up-tempo songs that are unashamedly positive, and their lyrics tackle an array of serious topics: empowerment, human rights, environmentalism, freedom. “Part of our vision is to lift people’s spirits,” Sizemore says.

The band has been playing shows around Louisville, mostly at coffee shops and outdoor fairs. Right now they’re focused on two things: being a positive force and keeping themselves happy. As Sizemore says, “We have fun together!”