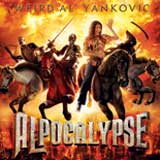 Satire is the smartest and most honest form of comedy. Spoofing is cheap and has no shelf life. As a little guy, I loved Al Yankovic, had all his records, and later, tapes, and played them repeatedly on family road trips. I’ve kept up, as my brother still counts himself a fan. I’ll chuckle upon discovering who he’s mocking this time, interested long enough for a quick You Tube, rarely finishing the song but enjoying a verse, especially when in the company of others. A full hour of new Yankovic is a whole different feat. With our laptops full of days’ worth of music, and as split as we are as a culture and our listening habits, Weird Al’s job has gotten harder. Pop radio is no longer all-inclusive; there are no cross-platform megastars in music anymore, perhaps excluding Timberlake, who hasn’t released any non-comedic songs in years. It’s a hard listen anymore to summon anything more than a “Huh, GaGa!” or a “Taylor Swift, heh …” or only noticing by the fifth listen that the White Stripes song is about Charles Nelson Reilly. Imagine that.