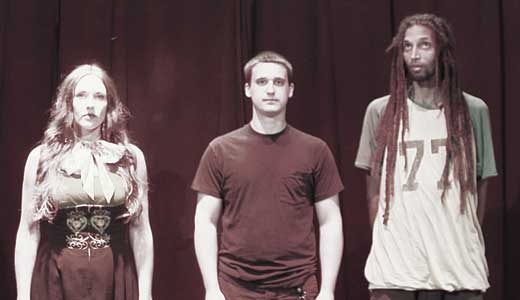 Softcheque is a three-piece band from Louisville that creates a mysterious blend of music, reminiscent of avant-garde composers and the ’80s keyboard revolution. Featuring Dane Waters, Arsenio Zignoto (aka Alan) and Warren Christopher Gray, the band is brainy without any uptight overtones — plus they throw in some funky humor and catchy electrofunk pop hooks. Softcheque just released an excellent new album, Misericord, as a digital download (on the awesome Bandcamp site) and on vinyl (as it was truly meant to be heard). LEO spoke with Dane Waters (vocals/keyboards) about their new album title and why the future will be totally interesting.

LEO: Softcheque brings up a sense of tangible nostalgia … good memories of bands I heard in the ’70s and ’80s that operated outside of pop music (and eventually became legendary): Peter Gabriel, Kate Bush, Tangerine Dream, Cocteau Twins, Brian Eno, Talking Heads, Laurie Anderson, Can. Those bands can make you feel like, “This is what the future will sound like!” Do you feel like the band is part of a “modern music” or “futuristic” tradition?

Dane Waters: Though I find an irresistible allure in the future, I think we try to be in the moment in order to get there. Being a subconscious synthesis of multiple styles from the past/present, we couldn’t exist without them. So rather than futuristic, I think we’re going for more of an “outside the frame of time” feel. Plus, I think our best music is what we’re about to make next.

LEO: Despite mentioning the other bands above, you have a sound that is unique. You guys have worked together on many different projects. What made Softcheque develop into its own beast? When did you decide to make a full-length album?

DW: I wanted to write songs I was in love with, both musically and lyrically. I especially wanted to sing them, because singing makes me happier than anything. Alan had been in Sapat with me, and I knew that he would know exactly how to complement the sounds I was going for. Thinking of drum parts does not come naturally to me, so that’s where Warren comes in. Both Warren and Alan are multi-instrumentalists, allowing us a wider range of possible sounds. As far as the decision to make an album, with the number of songs we had, it was the next logical step. We all share an intense commitment to seeing where this project will take us.

LEO: Sorry to throw out the difficult “influences” question, but … who/what helps you make your music?

LEO: The production techniques and atmospheres on your new album, Misericord, are very clear and human sounding. It sounds like a band working together in a common space … not aggressively assembled on computers or overly “fixed.”

DW: Warren has a background in recording, so we had the resources to do it ourselves, however humbly. We kept the process simple and pure to retain the integrity and immediacy of the songs without relying on studio gimmicks.

LEO: You all have experience playing all kinds of music (from opera to pure sound experiments). Does 21st century classical music inform your songwriting process?

DW: I’d say that it’s still in the mix, but functions to a much lesser degree. I still use theory to write the harmonies, but rarely notate the songs. They’re in our heads and this is very liberating. Most of the time, Alan or I will bring in songs and we hammer out the details pretty democratically.

LEO: Why does Louisville have so many great avant-garde and experimental bands? It’s like Berlin in 1977 around here.

DW: Low rent = leisure time? Or perhaps it’s just that Louisvillians love music and sound. I think it is a kind of zeitgeist. If one of our friends is in one cool project, they’re usually in at least two or three more. We just can’t get enough.

DW: The sound of right now is an overgrown garden teeming with life and history and Wunderkammers.

LEO: If a person was going to ask you a question in an interview, what would that question be?

Softcheque plays on Friday, July 22, at Cahoots at 9 p.m.