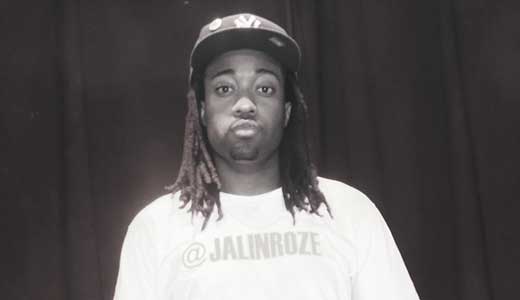 Just a few years ago, James Lindsey was a regular sitting at the TARC stop, headphones on, rapping to himself. “Two and a half hours a stretch waiting for the bus. You get good at it,” he laughs. The man who would become Jalin Roze put in the time, and thus the work, to become one of the most promising emcees in the city.

What you notice first about the music is balance. His sound doesn’t cater to just one time zone or area code. You can bounce just as easily as you can nod. Jalin takes great care to keep the topics diverse. “The greats pull from everything,” be it politics, childhood, streets, love, confidence, loss. Nothing takes too much time, and a listener is left with a full picture, not a two-dimensional cartoon character. Loss is the second thing you notice. It’s peppered throughout his lyrics and becomes clearer from the colors you see in his production choices. Lindsey’s mother died from cancer when he was 22. “She’s the happiest and saddest part of my life. It’s all a reflection of her teachings. She liked my music. She drove me to be better.” His diversity reflected hers. “She had a beautiful array of music, Luther to 2pac … ‘Here & Now’ to ‘How Do You Want It.’”

Jalin first gained a bit of prominence when his take on Mos Def’s “Taxi” and its accompanying video found its way onto the widely known hip-hop blog 2dopeboyz. He’d already released his first mixtape locally, The Blouprint, featuring his lyrics and vocals over well-known Jay-Z tracks. Next was Few & Far Between, a collection of odds and ends that was better than most proper albums. “Blogs make it more competitive,” he says, alluding to the seemingly endless supply of new emcees and mixtapes made available via the Internet. The only difficulty is not being from New York, Los Angeles, New Orleans, Chicago or Atlanta. “There’s no in-between.”

His secret weapon is the team he keeps behind him. He met producer Josh Nicholson on the basketball court. Nicholson’s cousin was the one who first made beats, and he watched and learned until one day — sweat drying after running the court — the newly named Josh La Rock surprised everyone with, “Oh yeah, I’ve been making beats.” La Rock lives in Cincinnati, attending art school; he and Jalin rarely see each other and have never been in the studio together. Email and Facebook messaging is how they make music. The engineering duties are handled by David Soards, and if it seems odd that an engineer gets a press mention, think of how raw (read: cheap) most local (to anywhere) hip-hop sounds. “Ninja Soards” is a master behind the boards and makes Roze’s and La Rock’s collaborations sound like a million bucks. Jalin credits their joint stubbornness and remembers spending six hours mixing one song.

Jalin Roze’s latest, The Brilliance, is one of ear X-tacy’s top sellers of 2011. For such a confident title, the disc doesn’t shy away and stands next to (and taller than) most any rap album you could name this year. He’s already at work on the next one and has been enjoying the sense of community that’s grown around the Louisville hip-hop scene lately. His team, Feel Free, along with the Grimey Rhyme Regime (Scanners, etc.) and Skyscraper Stereo (Mr. Goodbar, Dat Boi Dunn), collaborate and showcase regularly under the clarion call “All Crews United.” Even when the spotlight is shining directly on him, Jalin still shows balance.