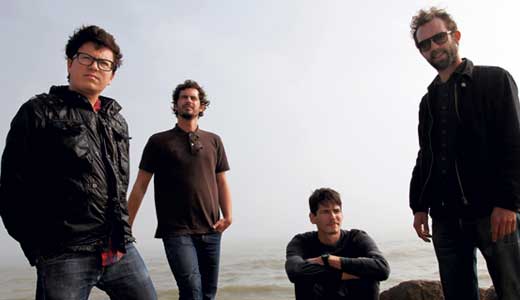 Texas-based rockers White Denim are a modern throwback, a classic rock band who have achieved success through both hard work and Internet-based buzz. Their new album, D, was given four stars by Rolling Stone, which said their “sublime attack often recalls late-Sixties Grateful Dead, when their songs still had garage-rock drive but were exploding every which way.” LEO spoke with singer/guitarist James Petralli.

LEO: You seem to have had an easier time in England than here. From Hendrix to Kings of Leon, why do you think they respond more quickly to American rock ’n’ roll than some Americans do?
James Petralli: I think the main reason is that the U.K. is a much smaller and more densely populated country than America is. We were fortunate enough to work with an amazing group of people that understood our music and where we wanted to take the band on the first two records. The right combination of industry support and social climate made it easy for us to reach the entire country. Also, it could be the school systems. Generally, the people residing in Europe have a deeper inherent appreciation for artistic gestures across the board.

LEO: In the studio, how much do you try to capture your live sound? How free do you feel to experiment with sounds you might not be able to recreate live?
JP: This is a song-by-song situation. On the first two records, our studio space prevented us from capturing the full band live. We spent time trying to capture live individual takes, but were never able to track the trio together. Now that we are in a larger space, we are consistently going to the live band approach to recording basic tracks. Both ways have yielded successful results. We view the studio and stage as two completely independent mediums that may or may not inform one another from song to song. We try not to limit ourselves in either realm.

LEO: How much affect have blogs had on people knowing who you are? Do people tell you how they first heard your music?
JP: Most people that read music blogs have at least heard of us, though many have probably forgotten about us on account of the height of our “blog buzz” occurring in 2008. I really appreciate the support we have received from a few music sites. I do, however, feel that music blogs have had a tremendous impact on the way certain groups of people process music. I am not by any means saying that it is the fault of music blogs, but I think there is something disturbing about how disposable music can feel when you acquire it digitally and how that affects our culture. People generally do not tell me how they first heard our music, though I am interested in that. Maybe they will begin to when they read this.

LEO: Do cool dudes in rock bands still get as much action as they did in the ’70s and ’80s? Or is it more of a business-like atmosphere that you encounter today?
JP: I am not sure, really. I think as long as there are bros and babes in the world, there will always be action. We are a pretty serious bunch, though. Hanging on is much more important to us than hanging out.