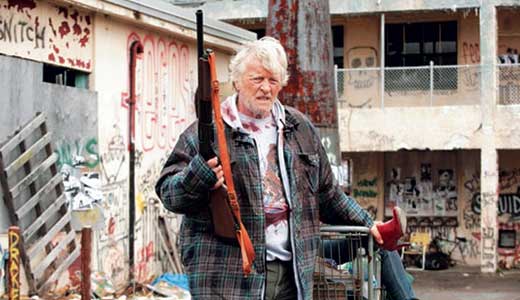 Hobo with a Shotgun

HOBO WITH A SHOTGUN

Fans of gritty grindhouse actioners and goofy Troma gore films are probably wetting themselves in anticipation of this terrific trash title. Rutger Hauer is a homeless man who dreams of buying a lawnmower, only to become the victim of an evil drug lord. Next stop, the sporting goods store, where he literally picks up a shotgun and starts ridding the world of all its corruption. (We can’t wait for him to make it to the LEO offices.) Simple, straight-forward and brilliant.

Scream-queen Tiffany Shepis stars with Louis Mandylor and Ed Lauter in this turgid tale of evil stem cell research that results in a serum that resurrects the dead. A nicely done and entertaining bit o’ crap that never stops moving, despite the cast clearly making up dumb dialogue as they go. Fun.

Takashi Miike returns with possibly his best film ever, a remake of the classic 1963 tale of one truly evil warlord and the men who lose everything trying to bring him down. How evil is he? How about using a rival family — including wives and children — for target practice! Savage, beautiful and powerful, this is highly recommended.

Simply ridiculous SciFi Channel fodder about moron scientists who “accidentally” travel to a different dimension. (Whoopsie!) And, apparently, the only living thing in this jungle universe is a weird CGI dino-like monstrosity who only eats moron scientists from other dimensions. Stars Joe Flanigan with a cameo by John Rhys-Davies. Of course we liked it.

Claude Rains was one of our favorite actors, whether starring as “The Invisible Man,” helping Rick in “Casablanca,” or lending his magnificent voice to scores of horror/thrillers. But few remember him in this, the first of a series of films where he plays a musician with a quartet of harmonious and comely daughters. In this one they are each paired with upstanding young suitors until rapscallion John Garfield appears on the scene. If you like great old movies, you’ll love this.

MAKING OF THE PRESIDENT

The Pulitzer Prize-winning books of Theodore H. White spawned a trio of documentaries focusing on the 1960, 1964 and 1968 presidential campaigns, each the product of David L. Wolper (“Roots”) and each excellent in its own right. This boxed set contains all three docs, re-edited, plus amazing bonus material. Simply the greatest insight into the electoral process ever made; should be required viewing for all voters.

MYSTERIES AT THE MUSEUM SEASON 1

A fun Travel Channel series that can entertain adults, kids and smart-ass teens alike. It starts with a leisurely stroll through America’s museums, randomly stopping to look into the history of some seemingly insignificant artifact. From there you get completely sucked into the adventure and wonder of past lives and lost genius. Worth checking out.

OF GODS AND MEN

The more or less true story of eight French Christian monks, living freely and unmolested among their Muslim neighbors in Algeria, until a murderous fundamentalist group starts killing infidels during a civil war. How should they respond? To stay will mean death, but to leave is to forsake their faith. In French with subtitles.

The long-overdue Blu-Ray release of a juicy comic plum. Kurt Russell and Goldie Hawn (who are still, as they say, “in a relationship”) star in this Garry Marshall tale of a haughty, obnoxious rich-bitch (Hawn) who bumps her head and wakes up thinking that slobby, penniless handyman Russell is her husband. A timeless comedy classic; our highest recommendation.

We rarely mention exercise or other self-improvement videos in this column, mainly because we’re too fat and lazy to move. But frankly, our knees are killing us (can’t imagine why). Anyway, this simple program offers four tricks to make your knees feel better without you having to don Spandex, sweat, put down your nachos, etc. And they work. What more could you want?

THE BEST OF SESAME STREET SPOOFS

OK, we admit it, we watch “Sesame Street.” And some of the reasons we do are their simply amazing spoofs of great TV shows and movies, aimed at little squirts yet surprisingly clever on so many levels — they often remind us of “The Daily Show.” If you don’t believe us, check this out.

The first “Trailers from Hell!” was a sublime treat for anyone who loves creaky old movies — but this one tops it. Twenty vintage trailers from such great films as “Little Shop of Horrors” (also includes the entire film), “Donovan’s Brain,” “Fire Maidens From Outer Space” and “Flesh Gordon,” with commentary by Guillermo Del Toro, John Landis, Roger Corman and more. A steal.

A rousing low-budget indie tale of medieval warriors, honorable princes, mad monarchs and evil sorcerers who use witchcraft to keep the land under a dark yoke of fear. Stars Luke Goss and Ed Speleers with a cameo by Sarah Douglas. Fun.