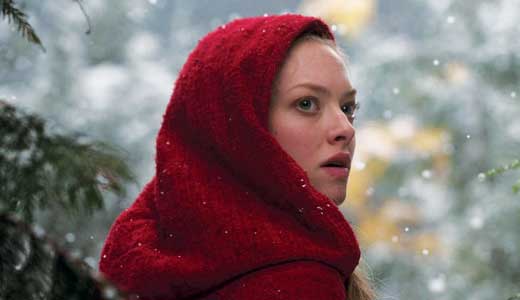 Another of those soft spookers aimed at the PG-13/young-teen crowd starring sexy Amanda Seyfried as the titular wide-eyed innocent. It’s all very “Twilight”-ish (coming from the same director as that tween abomination) with two hunky guys each compelling the virtuous Valerie to show them her pretty little picnic basket while a werewolf prowls the woods. You’ll howl at the wicked cameo by Gary Oldman as a priest filled with arcane hooey.

We’re not raving fans of Gerard Depardieu, but this is one of the best French crime-actioners of the last decade (now on Blu-Ray). He plays one of two police lieutenants who have made busting a murderous crime ring their personal vendetta — and in doing so, are quickly becoming more dangerous than their quarry.

Big-budget mega-action alien-invasion pre-summer blockbuster starring Aaron Eckhart as a Marine sergeant running through the ’burbs of L.A. in a hopeless battle to save the human race from a massive, murderous alien horde. Lots of hand-held cameras and overblown CGI effects make this the perfect brainless popcorn movie. Also goes well with Boston Lager and Cheetos.

One of those wonderfully cheesy late-’60s art-house nudies from the vaults of producer/directory Radley Metzger, now on Blu-Ray. Ravishing French Playboy Playmate Danièle Gaubert dons lots of weird leather and endures the airborne embarrassment of soft-core S&M, all of it supposedly inspired by Alexandre Dumas’ novel “The Lady of the Camelias.” But don’t let that stop you. Great stuff.

Regarded by many as the original reality TV show, this goofy ’60s contest featured some of the country’s biggest stars … bowling. Yep, and it’s just as stupid as it sounds when William Shatner, Leslie Nielsen, Roy Rogers, Adrienne Barbeau and others go head-to-head for big prizes and forgotten charities. What a hoot.

Aka “Hobby Farm,” an unrepentant look at sex-slavery with hints of illegal gambling and narcotics for aroma. Paul J. Murphy (who?) stars as a man with a tortured past who finally rebels at the day-to-day atrocities around him, leading to a bloody battle for freedom.

This is a neat little series, quietly being offered by Disney. Each volume features one classic animated short, fully restored (this time: “Mickey Down Under”), along with several that have been “edited” to clean up dated racism and language, along with a few additional modern amenities.

Emily Rose is a cute little FBI agent who travels to the picturesque hamlet of Haven, Maine, to investigate a murder. But it seems everyone in Haven has some sort of supernatural power — none of which work right — and her own past is wound around a storied, impossible event in Haven’s past. From the SciFi Channel, based on Stephen King’s novel “The Colorado Kid.”

One of the artsy-fartsiest flicks ever filmed, now given the Criterion/Blu-Ray treatment. Four unnamed people who look an awful lot like Albert Einstein, Marilyn Monroe, Joe DiMaggio and Joe McCarthy walk into a hotel room in NYC and start talking about the Cold War. A true arthouse masterpiece starring Michael Emil, Theresa Russell, Gary Busey and Tony Curtis.

Food-junkie Adam Richman, who apprenticed rat-cheer at Actor’s Theatre in the late ’90s, returns for another cross-country pig-out for the Food Network.

ONE FROM THE HEART

Fans of movie disasters will immediately recognize this as the film that nearly sank Francis Coppola’s career. Teri Garr and Frederic Forrest star in the slim tale of a Las Vegas couple bitching their way through a night out. Somehow filmmakers lost their minds and the movie’s budget bloated beyond reason, killing the studio and sending all concerned into bankruptcy. With a great score by Tom Waits and Crystal Gayle.

One seriously demented and entertaining tale about two brothers, one of whom becomes depressed, jealous and angry after his just-plain-stooopid sib falls in love with a beautiful, emotionally fragile girl.

Damn-fine looking Shera Bechard (November 2010 Playboy Playmate and star of “World’s Sexiest Nude Women” of 2007) stars as a mute Russian girl on the trail of the sex-slavers who killed her sister. This, of course, requires that she infiltrate Toronto’s notoriously well-lit brothels, eh, and, you know, show you her boobies and stuff. Neat high-heeled revenge on lowlife scum like us.