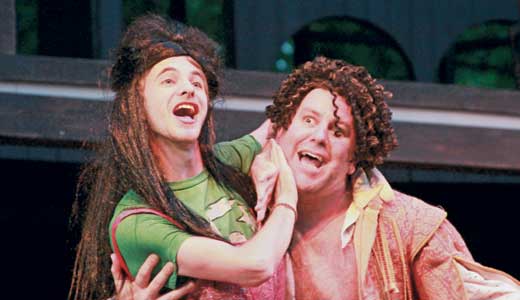 It’s probably a safe assumption that 95 percent of all high school graduates in America have read and/or performed “Romeo and Juliet.” It’s one of the greatest classics in both literature and theater, and it has become a vital part of high school curriculums across the nation.

The “Romeo and Juliet” that took place in Central Park last week, however, was not your high school’s production.

For starters, it had but two actors, each playing a minimum number of characters. The famous balcony scene utilized a cherry picker, and Juliet (who looked remarkably like Snooki) repeatedly referred to a dancing and prancing Romeo as “Butt Love.” And the kicker — the entire play was done in less than 12 minutes.

This, ladies and gentlemen, was part of “The Complete Works of William Shakespeare (Abridged).” Introducing the annual Kentucky Shakespeare Festival, this play aims to portray every work by William Shakespeare in one 90-minute production using only three actors (Ash Law Edwards, Kevin Rich and Kyle Curry) — not an easy feat, and “Romeo and Juliet” was just the beginning. From there, various other plays were interestingly adapted.

“Titus Andronicus” became a cooking show. “Othello” was done as a rap. All of Shakespeare’s comedies were condensed to one story, dubbed by the actors as “Four Weddings and a Transvestite.” The histories were done as one football game, with the monarchs battling through tackles and touchdowns. “Macbeth” was set in a pub using kilts and over-the-top Scottish accents. All of the sonnets were reduced to a single poem, which was written on an index card and passed around to the audience. And the entire second act was dedicated to “Hamlet,” which became a mix of authentic Shakespearian dialogue and improvisation (such as Rich’s emotional breakdown, mid-monologue, lamenting that the kids of “Glee” only took 12th place at nationals).

The show relied heavily on improvisation, with the actors frequently breaking the “fourth wall” to address the audience directly. They often dropped cultural references, keeping the show fresh (such as Curry’s response when told the plot of “Hamlet”: “No, that’s ‘The Lion King.’”). The actors became the main characters of the show, the Shakespearian roles cast as secondary performances. The transitions from Shakespearian to contemporary dialogue were fast-paced and seamless, never a stumble or a stutter. These frequent transitions, however, can make it a bit hard to follow. If you’re not familiar with Shakespeare, the chopped-up way the plays are presented can become confusing.

Occasionally, the improv fell flat: Knowing when to abandon a joke is a crucial skill — one that at times was absent. Overall, however, the three actors had great comedic timing and kept the audience engaged, using crowd energy to fuel their performances. This entertaining show was a perfect kickoff for the festival, but if you’re a Shakespeare purist, it may not be for you. As Edwards said, “We don’t have to do it justice. We just have to do it.”