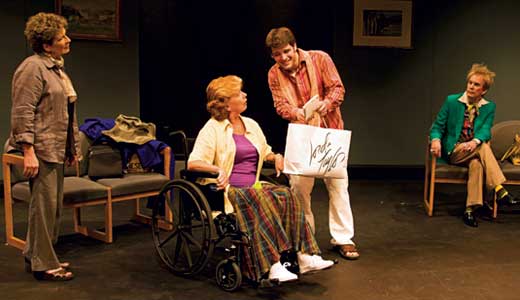 The New Century
Presented by Pandora Productions. Directed by Michael J. Drury, Georgette Kleier and Steven Rahe. Continues through June 26 at the U of L Thrust Theatre, 2134 S. Floyd St. For information and tickets, call 216-5502 or go to www.PandoraProds.org.

Many years ago, I was lucky enough to catch the brilliant comedian Phyllis Diller in a fairly small, fairly smoky, fairly glitzy cocktail lounge. In the fast-paced, severely time-constrained context of her frequent TV appearances — and in her heyday she was one of the most popular variety show guests of all time — Diller was a master of the zinging one-liner.

Her club act was a different critter altogether. She spun long, intricate monologues, populated by vividly drawn characters and rich in tangential anecdotes. And if there were some established formula for calculating the ratio of laughs per minute, I’m pretty sure Diller’s club show would have spiked the curve: Her first few stories caught us up in her rhythm, and for the next two hours, it was basically inhale-laugh, inhale-laugh, inhale-laugh.

Paul Rudnick’s “The New Century,” which opened last weekend at U of L’s Thrust Theatre by Pandora Productions, isn’t quite as fast-paced as Diller’s club show — partly because Rudnick leavens his humor with moments of heart-felt pathos — but it comes close.

Structured as three one-act segments with a final closing scene that pulls all the characters together, “The New Century” is a sharp-witted look at sexuality — especially gay sexuality — in the new world. And if Rudnick’s new world is populated mostly by stock characters, well, they’re some of the funniest stock characters you’re ever likely to see.

One segment, directed by Steven Rahe, features Carol Tyree Williams as the quintessential Jewish mom, proud of her kids, but even prouder of herself for being the most tolerant, accepting, put-upon mother in the world. It’s not that her kids never call or write; it’s just that seemingly every time she hears from them, the news is that they’re transgendered, or lesbian, or into bondage and scatology. And the silver lining in her world is that the son who is into bondage (Kiel Dodd) is a submissive sort — who can now be made to come visit whenever she wishes.

Another segment, directed by Georgette Kleier, offers Susan McNeese-Lynch in a role that fuses quiet satire with impressively subtle emotions as an Illinois mom whose view of the world — including the death of her son from AIDS and the September 2001 terrorist attacks — is filtered through her love of kitschy crafts, and her firm conviction that fabric arts — whether in the form of a Christo installation, a quilt square or a duvet — are the best way to heal the world’s ills and protect us from the evil works of “muslin terrorists.”

The laugh-out-loud pleasures of the funniest one-act, “Mr. Charles, Currently of Palm Beach,” directed by Michael J. Drury, with Eddie D. Lewis in the title role (Kiel Dodd as his occasionally nude sidekick, and Laura Ellis as receptionist at the cable station where his over-the-top TV show airs at 4 a.m.) are not to be missed. Exiled from New York City because he’s “too gay,” Mr. Charles is a gloriously, joyously, flamboyantly gay man whose hairdo and clothing (designed by Donna Lawrence-Downs) are as outrageous as his compelling take on the world.