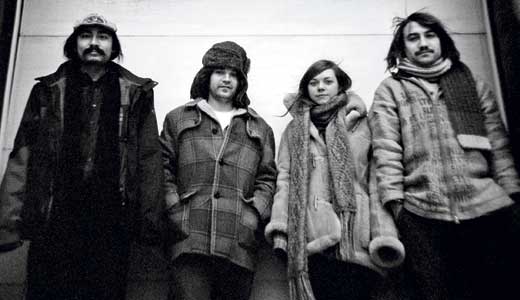 “Have you ever interviewed Jim James? I’m a fan.”

Questions like “Have you ever gone to the Kentucky Derby with Colonel Sanders and My Morning Jacket?” are expected from non-locals, but this time I’m being asked by Jeff Prystowsky, leader of a highly acclaimed, increasingly popular band, The Low Anthem.

Prystowsky spoke with LEO from the band’s van, in “Nowheresville,” near the border of New Mexico and Arizona. The up-and-coming folk-rock band has spent most of this year on the road, promoting their richly textured third album, Smart Flesh. The Providence, R.I., natives went from self-releasing their early albums to signing with Nonesuch Records, the NPR-favorite label of Jessica Lea Mayfield, The Magnetic Fields and the Carolina Chocolate Drops, among others. Their headlining tour brings them to Louisville Saturday, if for no other reason, says Prystowsky, than because “we’re bourbon drinkers, and that’s the mecca.”

“We’ve been out constantly since February. We did a month in Europe, then the East Coast as a headliner, we opened for Iron & Wine for 12 shows, then Jazz Fest, then back to the Northwest,” he says.

Do they enjoy their journeys? “Yeah, very much so. Like right now, I just love the empty landscape with the giant mountains looming in the distance. I find that very beautiful and peaceful and calming.”

Prystowsky doesn’t seem like the cliché of the road-warrior rocker. His interests also include history and baseball. The Orioles fan compares their shows to his favorite sport, almost effortlessly. “It’s kind of holy practice for me. Those are my favorite concerts, when the artist reaches the level a preacher achieves — that intensity. We can feel it on stage when it happens, and it doesn’t happen often. It’s like a batting average — if you can get probably one out of 10, it’s pretty good. (Bandmate) Ben just commented, six out of 10 is his goal.”

The inquisitive bandleader asks my thoughts on their Louisville venue. It’s their last headlining show before they go back out with Mumford & Sons. Many of their spring shows sold out, so I ask if people back home recognize them now on the street. He says sometimes, but “it’s kind of in a friendly way, not in a paparazzi way. It’s also good for discounts.”