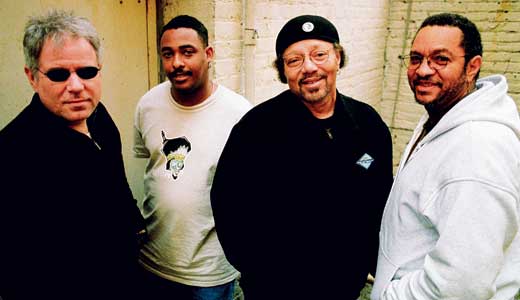 “The Fourth of July, it’s gonna be a great situation. I don’t like to be cold, I really like the heat.” At 73, Art Neville should know what he likes. As one of the famed New Orleans Neville family of musicians, he has long since stamped his sound all over American music.

The keyboardist has worked as a musician since the early 1950s. He helped form the legendary Meters group in the mid-’60s, which drove crowds wild with their mix of second-line funk, blues and intoxicating dance grooves. After laying down a series of records that are highly prized and still mighty influential today, the group ended in the late ’70s. Art and kin began performing as the Neville Brothers, who would go on to have numerous hits of their own.

Today, Neville performs with fellow ex-Meter George Porter Jr., still on bass, along with drummer Russell Batiste Jr. and guitarist Brian Stoltz, as the Funky Meters. They headline the Fourth of July concert at Waterfront Park. LEO spoke with Neville last week, and he made some surprising revelations about his take on modern music.

“Some of the new stuff is real, real great. I been watching these people on … what is it? … on TV … Man, that stuff is real, real nice. I mean, most of it is. I like a lot of the new stuff with Lady Gaga. I’m getting the video, so that makes it a little different than just listening to it. My favorite used to be Michael Jackson. I would listen to him a lot. Michael Jackson was supreme.”

In his hometown, Neville said, “They got bands doin’ jazz, doin’ … what do you call that? (Hip-hop?) Yeah, the hip-hop stuff. I listen to the radio a lot; I like to mix my stations up where I can get jazz, I can get funk, I can get rock — I listen to all of it. (Like a big gumbo stew of music?) Yeah, definitely.”

When I asked if he likes the hip-hop stuff, he replied, “We’re working on some things. I don’t know when it’s going to be out, and I’m not gonna say when — the way the business goes, you don’t know.”

While Meters fans can expect to hear some classics, this Funky bunch isn’t just coasting on past triumphs. “We use some of those songs that we did, and we have some new stuff, too. It’s good stuff.”

Asked to pick favorites, Neville deferred. “All of ’em are good songs to me, so I don’t want to pick out one or another. I don’t see any discrepancy, one way or another. People still like what we do, it’s enjoyable. I don’t think that it’s any different.”

Neville especially enjoys outdoor concerts as opposed to dark bars or seated theaters. “We want people to have a good time. They’re gonna enjoy what we’re doing, that’s for sure.” I asked if he thought a drunk crowd was better than a sober crowd. “Nah,“ he began, before thinking it through more. “I don’t really know. Maybe it’s better for some people.”

Neville hopes to keep playing, “As long as I can, man. While I’ve got the energy, and I’ve got the drive to want to do it, I’d like to be able to be playing. I like to play. I don’t know nothing else — so that’s my best bet. As long as people still like to hear it, I want to play.”