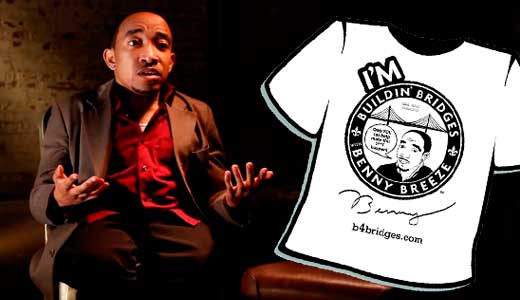 Today, the ongoing saga of the Ohio River Bridges Project is going to get a lot weirder.

At 1:30 p.m. at the Kentucky African-American Heritage Center, the public will be introduced to Benny Breeze, the main character of a short film whose purpose is to “educate and entertain” the community about the $2.9 billion public works project in what amounts to a bizarre media campaign and bus tour bankrolled by pro-bridges project financiers that some members of the anti-toll activist community are calling an “astro-turfing” effort designed to distract, mislead and — at worst — offend.

As depicted in a YouTube trailer for the film, titled “Buildin’ Bridges with Benny Breeze,” the character is a foul-mouthed champion of the bridges project whose penchant for cigarettes and racial stereotypes has run afoul of African-American community leaders, and whose humor depicts a derogative stereotype at their expense.

“This shit’s gettin’ ridiculous,” says the diminutive, wise-cracking Breeze in the film’s trailer, pointing out the sorry state of the Kennedy Bridge. “There’s been 450 public meetings and a five-year federal environmental study. That’s a lot of time and money. And we’re gonna waste it, throw it away?”

Breeze (née Chris Saunders, a local comedian) is a character created by Team HiHo, a video production duo comprised of Louisville-based filmmakers Brennan Clark and Kyle Crews, who describe themselves as apolitical entertainers who have worked with each other producing comedy shorts since they were students at Manual High School.

In April, Crews and Clark were commissioned to create a short film about the bridges project by Vaughan Scott — a Louisville investment banker who had grown tired of what he called the “rumors, speculation and innuendo” that had come to dominate discourse on the bridges project — to produce a short film that would bypass the dry rhetoric surrounding the multifaceted public works project, which aims to reconfigure Spaghetti Junction, build two new bridges spanning the Ohio River, and utilize tolls to help cover the massive cost.

“Neither Brennan or me had given too much thought about the bridges issue. I’d say we’re both … kinda apathetic as far as local politics is concerned,” Crews says. “We don’t really get into it a whole lot because there is so much back and forth, and there’s very rarely progress.”

“We really saw a need there to get some information out, because so little of it had reached the public,” Crews adds. “We’re pretty goofy guys, so the chance to take a message like this and kinda spin it out of a political discussion and more into entertainment — and educational at the same time — really kind of excited us.”

Although Scott says he became involved in the project on behalf of the future of his three daughters and the future of the community, there appears to be more motivation behind his senses of familial concern and civic duty.

Scott is a board member of Southern Indiana’s pro-bridges project chamber of commerce, One Southern Indiana, and is the vice president of Wells Fargo subsidiary Axiom Financial Strategies Group, a well-to-do position allowing him to spend (along with other anonymous donors) an undisclosed sum to finance the Benny Breeze campaign.

In 2003, he served as the vice president for wealth management at brokerage and investment firm Smith Barney and, according to his Axiom corporate profile page, founded the Smith Barney Investment Center at New Albany’s Your Community Bank, a commercial bank upon whose board sits none other than Kerry Stemler, finance subcommittee chairman and co-chair of the Louisville and Southern Indiana Bridges Authority (LSIBA).

Currently, Axiom is housed in the same building as Stemler’s bank, at 101 W. Spring Street in New Albany, Ind.

The need for a new branding effort was conceived in part during an April 20, 2011, meeting between Scott, Clark and Crews; bridges project managers John Sacksteder and Gary Valentine; the Indiana Department of Transportation director of strategy and major projects Scott Stewart; and bridges authority spokeswoman Christi Robinson, among others.

During that meeting, Scott says, “We kinda laid it out for them. We said we may choose to use some language that people may not like. The point is that we have to get the information to the public quickly.”

“In a country that was built by risk takers … we’ve created an environment now where, by God, take some risks, but if it’s not a sure thing before you do, we’re gonna look and watch you fall,” Scott says. “It’s better to err for having done something than to not do anything but hope things change.”

Such impediments to the infrastructural change advocated by Breeze and his message-crafters are made clear on the campaign’s website — b4bridges.com — which says that “as a community we must work collectively and swiftly to eliminate this threat as promptly as possible,” the threat likely being anti-toll groups, 8664 and even the obstructionist-minded conservancy River Fields, all of whom have issues with the bridges project as is.

“Frankly, I’m not sure how to respond. I don’t understand who it’s targeting or what is the motivation behind the pro-bridges push,” says J.C. Stites, co-founder of 8664, about the Breeze video. “We think they might be trying to solve the wrong problem. We’re all for doing a better job of maintaining what we already have. But when it comes to any new work, we want less Spaghetti, lower tolls and faster completion. We want there to be less concrete and rebar in the future.”

Others, such as Kentucky Jobs with Justice’s Attica Scott, are offended by Breeze’s portrayal of African-Americans.

“I’m offended to even think about who the target audience is supposed to be,” Scott tells LEO. “Particularly if it’s supposed to be my community of black folks: Have somebody sitting at a club with a jar full of cigarette butts and what appears to be a glass of alcohol. It’s reaching into the lowest and worst stereotypes that people could find of a particular sector of our community.”

But Clark, Crews and Vaughan Scott say that great care and thought were taken when constructing Breeze’s image and character, adding that their unorthodox, irreverent approach will provide for a better conversation or, at the very least, entertain.

“I think anytime you create a comedy that’s worthwhile on any level, there’s certain risks you’re going to take that are not going to pay off with certain people,” Crews says. “Undoubtedly, there are people who are going to take offense to this, and what I would say is for the wrong reason. Hopefully they’ll see that our goals are to push this community forward and not just be funny guys.”