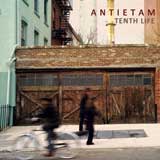 Louisville punk rock royals Tara Key and Tim Harris’ Antietam is a finely tuned, power pop, indie rock machine on their latest release. While the band has always flirted with punk and pop ingenuity, Tenth Life finds them as kings of their own hill. The album delivers songs that are always rocking and often pleasant, and they manage to keep it all interesting — not a common feat within these genres. They can channel a rock spirit akin to Cheap Trick or the occasional bout of Bowie-esque glam-rock riffs and put them directly beside their familiar indie territories without it being forced or novel. One clearly sees why they have earned the respect and have no doubt quietly influenced the likes of Yo La Tengo, among others. They’re damn crafty with their craft, and their experience has resulted in a songwriting nature that is all-encompassing. Tenth Life sees Antietam taking a step without any radical departures for old fans to adjust to but should surely appeal to plenty of new folks. An absolute pleasure to listen to repeatedly.