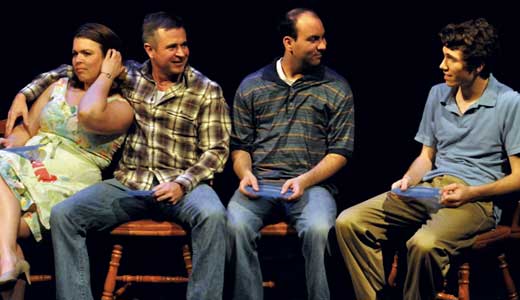 It ought to be an international crime that Billy Childish is not more well known, or taught in schools yet. As a musician, he has been inhumanely productive, leading garage-punk-blues bands like Thee Milkshakes, Thee Mighty Caesars and Thee Headcoats, amongst others, releasing dozens of records that have earned him fans such as Kurt Cobain, Jack White and Shane McGowan. He’s also an accomplished painter, poet and novelist. The 51-year-old, healthy Brit is now the subject of a documentary, “Billy Childish is Dead,” which will be shown at the Louisville Film Society’s new Dreamland theater, across from the Mayan Café. Local musicians will pay further tribute to Childish Friday night, when an ad hoc group, including members of Sapat and Softcheque, will perform, along with the like-minded Bad Blood, at Lisa’s Oak Street Lounge. That concert is $4, with an unlikely start time of 9 p.m. —Peter Berkowitz

Kentucky native Bobbie Ann Mason has made the bluegrass proud — she’s become an in-demand institution in literary fiction. Her newest book is “The Girl in the Blue Beret,” which she’ll read from and discuss as part of the Louisville Free Public Library’s Author Series. The World War II experiences of Mason’s late father-in-law were the starting point for this novel, which shows the community resistance efforts in occupied Europe, where courageous people took great risks to help downed Allied airmen. The flyboy at the center of this story comes home safely, but he moves into the next phase of his life quickly. Many years later, though, he is compelled to reconnect with his rescuers — starting him on a course that will change him forever. The event at the Main Library is free, but tickets are required by calling the number listed above. —T.E. Lyons

We are damn lucky to have as many local beer choices as we do, and Friday’s Louisville Brewfest celebrates this fact by showcasing all area breweries and their luscious, delectable beer. Best of all, admission is free, and sample tickets are only $1. If you buy a $3 ticket, you get a full beer. So who’s gonna be at this beer bash? Well, besides the LEO staff, anyone who loves a tall drink of ale from: Bluegrass Brewing Company, Cumberland Brews, Falls City Beer, Kentucky Ale, New Albanian Brewing Company, Upland Brewing and Lovers Leap Winery. There will be giveaways, a silent auction and music from The Fervor, Slow Charleston and Appalatin. My mom will be happy to know that City Scoot is giving complimentary rides as well. —Sara Havens

Hooray for the mix of art and commerce. Salvo Collective is the latest gallery and store to open up in the East Market/NuLu district. “Salvo is a hand-to-home collective, engaging the fine craftsman and urban consumer in telling the important stories of our community through handmade, functional art,” says creative director Savannah Barrett. “We believe in the value of repurposing materials of cultural significance, and facilitate a direct investment in artists, the preservation of local craft traditions, and the power of the object to cultivate community.”

Some local heavy hitters are participating in this new endeavor, including Kathleen Lolley, Forest Boone and Jonathan Swanz. Many of the artists will be at the opening during the July 1 First Friday Trolley Hop. A Dinnerworks exhibition — dinnerware as art — runs through Sept. 30. —Jo Anne Triplett

I’m not sure if I’ll ever understand Louisville’s fascination with the undead, but we certainly love our zombies here, and ZombieFest at Headliners is just one more reason for you to rip up your clothes and douse yourself in fake blood. There will be live music from Angels on Acid, Espermachine, Absence of Faith, Guano Loco, LifeLink and Sonik Foundry, with DJ Coppertop and Count Grozny spinning music between bands. I also hear there’ll be zombie-inspired art, jewelry, T-shirts and even soap (do zombies take baths?) for sale, as well as a costume contest, giveaways and kisses from the Va Va Vixens. Coincidentally, by glorifying rabid killing machines, you’ll actually be doing a good thing — part of the proceeds benefit Pillows for a Cure and breast cancer awareness. —Sara Havens

“Pilgrim Song” is a movie being filmed in Louisville, which is a good thing for A) obvious reasons, and B) it’s not “Elizabethtown,” which was truly awful. It’s not done yet, in part because movies cost a bunch of money. Therefore, Zanzabar is hosting a concert to help raise some of the remaining money for the production. Not having seen the script or otherwise knowing anything else about the movie, I’m already interested based on the quality of the music assembled for this event: Bunny Day & the Mercy Buckets, one of the most surprising, tuneful and electric groups around, will be playing, along with Heather Summers — whom Bunny Lacey Guthrie tells me possesses “one of the most beautiful voices in the world, ever” — and some more fantastic rootsy players like Jonathan Glen Wood, Andrew Iafrate and LEO music columnist Nathan Salsburg. So come support some kids with a showbiz dream. —Peter Berkowitz

Summer is on, which means that in addition to unplanned tornadoes, we can also expect lots more excuses for outdoor parties. Especially rooftop parties. For example, are you dying to celebrate the Fourth of July but can’t wait? Don’t worry, there’s a party for that! Local dance rockers The Pass and Nerves Junior are bringing along DJ Matt Anthony, public radio’s most seductive personality this side of Garrison Keillor, and Cirque Airotic, this year’s busiest burlesque troupe. The Pass have recently returned from a tour of the southeastern United States and have several new songs that might end up on their upcoming second album. Nerves Junior are planning to drop their debut record in September, so check them out now before they get a bit of success and move to Brooklyn. If that’s not enough, don’t worry, someone will probably also bring some watermelon to eat and/or chuck at cars. —Peter Berkowitz

Looking for high-quality ceramics at a cut-rate price? Head to the Scratch and Dent Pottery Sale, an opportunity to scoop up artists’ experiments, overstocked pieces and discontinued styles. Expect to find cups, bowls, plates, garden pots and sculptures by Amy Elswick, Wayne Ferguson, Matt Gaddie, Suzy Hatcher, Tonya Johnson, Laura George Lynch, Laura Ross, Davie Reneau and J.D. Schall. “This is a wonderful opportunity for people to find one-of-a-kind pieces by nationally recognized local potters at discounted prices,” says artist Amy Elswick. “It’s also a chance to see the creative process. When creating a new form or glaze, the artist often creates many samples before achieving his or her goal or vision.” Insight into artists’ development, dinnerware for a well-dressed table and pots to add flair to summer nights on the deck — it’s a one-day sale you don’t want to miss. —Mali Anderson

As small-scale, sustainable farming initiatives become increasingly popular across the country, the host of challenges faced by these nouveau agrarians becomes more widespread, creating enough shared experience in their reclamation of America’s post-industrial foodscape that those challenges form the basis of a shared culture. It’s this spirit of critical mass that fuels “Farm Together Now,” a collection of oral histories and photographs chronicling the individuals and communities working on the grassroots level (pun intended) in the current sustainable food movement. Food politics guru Michael Pollan selected “Farm Together Now” as his favorite book of 2010; co-author Daniel Tucker will be on-hand for a discussion and book-signing. —Jonathan Meador

It’s safe to say that throughout the course of our lives, we’ve all felt like outcasts at one point or another. In this way, we all have something in common with Arnold Beckoff, the protagonist of “Torch Song Trilogy,” the latest from the Wayward Actors Company. The play follows Arnold’s life through three acts, beginning with him coming to terms with and exploring his sexuality. Next comes Arnold meeting Alan, their subsequent relationship, and its tragic end. The third act finds Arnold as a single father raising a gay teenager. Through these trials and tribulations, however, Arnold’s biggest challenge remains his relationship with (and the intolerance of) his mother. Written by the boisterous Harvey Fierstein, the play has won two Tony Awards, two Drama Desk Awards and the Theatre World Award. —Brandi Terry

“Triptych” is a work with three parts, which is an excellent description of the exhibition “Triptych,” featuring new works by mixed-media artists Gayle Cerlan, Jacque Parlsey and Caroline Waite. All revel in the found object, but their stories, created in sculptures, collages and ceramics, have various goals. Cerlan’s expressive bird series is a metaphor. Naming a piece “Bibelot for Redemption” quickly illustrates we are not in “Cardinal in a Tree” territory. Parsley’s fanciful “Heart & Soul” collages of medical illustrations resemble Valentine’s Day cards made especially for Halloween lovers. She also hasn’t found a doll (to be more precise, doll body part) she didn’t like. Her companion on that ride is Waite, presenting Cupie/Kewpie dolls as “The Individuals.” She has also done a series of handmade books in shadow boxes. —Jo Anne Triplett

The Fourth of July is an important day for any red-blooded American. It’s the day when we set aside time to honor our forefathers for creating this nation of freedom — usually through some combination of grilled meats, alcoholic beverages and colorful explosives (hopefully not in that order). For Louisvillians, this day also brings the annual Crescent Hill Art and Music Festival, which takes place alongside the Crescent Hill Old-Fashioned 4th of July Celebration. This year’s celebration features works from more than 90 artists, in addition to the music of 35 bands. There will also be an antique car show, a pet show, food court, silent auction and play area for the kids. Of course, the Fourth of July just isn’t complete without fireworks, and this is no exception — there will be a Zambelli fireworks display after dark. —Brandi Terry