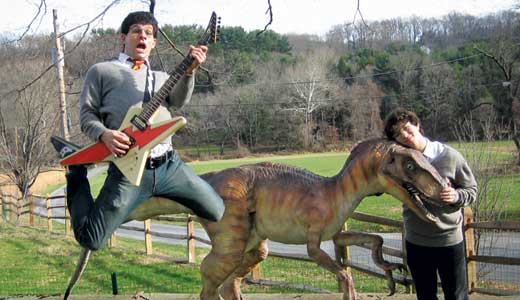 Harry and the Potters

Some things, like magnets, are subtle, mysterious, even confusing. Some things are exactly what you think they are. Such is the case with Harry and the Potters — you might see that name and think, “I wonder if that has anything to do with ‘Twilight’?” Nope, it’s some dudes who are really into the Harry Potter universe. They’re so into it, and not just in a Emma-Watson-is-so-hot way, that they’ve spent several years traveling around, writing and singing “wizard rock” songs about the Hogwarts’ world. For the band’s first local appearance in five years, our heroes at the Louisville Free Public Library’s Main Branch are presenting them in a free, all-ages, totally awesome setting. If your patronus is the spirit of rock ‘n’ roll, don’t miss this. It’s part of LFPL’s Summer Reading Program. —Peter Berkowitz

‘Ben Franklin: In Search of a Better World’

Anybody who’s watched enough of the HBO miniseries “John Adams” knows two things: 1) John Adams is a total dick; and 2) Benjamin Franklin lived like a rock star. Dude was founding newspapers, inciting revolution, negotiating treaties with France and chasing tail, creating a political archetype many covet, but few actually attain. So it is with great pleasure that the Louisville Free Public Library is hosting an exhibit of “handwritten and printed documents, objects owned by Franklin, maps, paintings and drawings” chronicling the life of an American original. The icing on the cake will be a presentation tonight exploring the Franklin-Louisville connection by Metro Councilman and history nerd Tom Owen, D-8. The exhibit runs through Aug. 15. —Jonathan Meador

Chris and Oliver, the brothers Wood, hail from Boulder, Colo., which should make you wonder immediately if, possibly, they might kind of be hippies. Well, as it turns out, yeah, pretty much. Fortunately, these two men are the type who are creative and productive, not the type who smoke too much kind-bud and then stare at their hands. If the word “wood” sounds familiar to you, it’s probably because, that’s right, bassist Chris is the “Wood” in Medeski, Martin & Wood, the most swingin’ jazz group that also sounds like a law firm on the scene today. Though Oliver is less familiar nationwide, he achieved his own success playing guitar with Atlanta’s King Johnson. (To our teen boy readers, I implore you to not make too much of Mr. Wood playing in “King Johnson”; it’s funny, yes, but not as funny as you might think.) —Peter Berkowitz

“Chess” is a 1980s musical considered a masterpiece by some, but it failed on Broadway, wilting under the competition of its time — namely, “Phantom of the Opera” and “Les Miserables.” Most people haven’t heard of the little-known musical penned by Tim Rice, best known for his other musicals such as “Jesus Christ Superstar,” “Evita” and “The Lion King.” “Chess” tells the story of a love triangle at an international chess championship, set in the throes of the Cold War. Louisville’s new The Encore Theatre will bring the play to life this weekend, and Encore founder Andrew Epstein says that “amongst die-hard musical theater fans, it has achieved a cult-like status.” Another possible reason for its initial failure? The fall of the Berlin Wall. Regardless, this will be the first time “Chess” has been staged in Louisville and is a must-see for serious theater fans. —Kevin Gibson

It’s no secret that women’s experiences are frequently absent from history books. With the exception of Women’s History Month, women’s perspectives tend to be relegated to the sidelines, explored every so often. Looking for Lilith is hoping to change that. In the company’s latest production, “Hunting the Basilisk,” four women from different time periods (ranging from the Civil War to today) find themselves trapped in a house together, with the basilisk outside. Trying to avoid this danger, the women stumble upon locked books containing their life stories. They learn about themselves and about each other by unlocking these books, learning history from a female perspective. Directed by Shannon Woolley Allison and written by J. Shafer, “Hunting the Basilisk” complements Looking for Lilith’s mission of re-examining history through women’s perspectives. —Brandi Terry

Last September, AOL included Butchertown in its Top 10 list of “Hot New Neighborhoods.” “This disheveled but tree-lined former meatpacking area of Louisville is the latest ‘hood where chefs and young designers are taking up residence in the Bluegrass State,” they reported. With new developments like the Blind Pig, Alley Theater and Bourbon Barrel Foods, the neighborhood is on an upswing from its sordid, smelly past. You can check out these new developments and more on Saturday at the Butchertown Art Fair, which will feature art, music, food, drinks and the like. Jason Pierce and Chris Maggard will be spinning vintage records, and there’ll be info booths from community organizations like the Humane Society and ArtSparks from the Speed Museum. The Butchertown Home and Garden Tour will be held the same day. —Sara Havens

Want to chow down on a Cuban sandwich while watching traditional Chinese dance? Or perhaps you’re in the mood for tamales and the hypnotic beats of a west-African drum circle? Well, you’re in luck: The 21st annual Americana World Festival can fulfill these and an array of other multicultural cravings on Saturday. What started as a simple block party two decades ago has blossomed into a full-scale celebration of diversity, attracting more than 6,000 festival-goers last year. In addition to international food, music and dance, there will be entertainment for kids, including games, a bounce house and face painting, as well as a soccer tournament for the athletically inclined. The festival takes place at the Americana Community Center, a nonprofit serving individuals and families from 79 countries. —Sarah Kelley

I like my vegetables, but I love my beer. I can’t think of a better way to spend a Saturday afternoon than sampling my way through 150 craft and import beers from around the country — throwing out a well-balanced diet in the name of exploration. For the sixth year, Keg Liquors in Clarksville is hosting the Fest of Ale, which benefits the WHAS Crusade for Children and takes place at a church — in case you need to make excuses to a spouse, parent or concerned friend. The fest features more than 40 breweries and three craft-brew distributors who will serve up tastes of their fruits of labor. Bring a chair to crash in after you’ve made the rounds and a few bucks for a burger. They’re hoping to raise more money for the Crusade than last year’s $5,600. Making goals, one beer at a time. —Sara Havens

Revelry Gallery will host a pair of openings Saturday for art exhibits that are sure to generate some buzz. Collage and mixed-media artist B.Bass brings his unique style in the form of magazine and newspaper ephemera from the past, re-worked and combined in such a way as to bring the original art and messages into a different realm, meant to inspire curiosity and interpretation. Bass is creative director of Captive Indoor Media and former president of the Louisville Graphic Design Association, so expect plenty. Kasha Ritter, known for her exhibits at Kentucky Museum of Art and Craft and many fundraisers and events that have shown her work, inks images of animals — without a brush. She uses only the ink bottle droppers, water and her hands. Sort of like adult finger painting, except there’s no naptime afterward. Ritter’s work is sure to please, making this a can’t-miss dual exhibit. —Kevin Gibson

Since the first “Shrek” film in 2001, the franchise has become a staple in children’s entertainment. After all, what do kids enjoy more than loveable monsters, princesses and funny animals? Keeping this formula that brought enormous box-office success, “Shrek” is now set to music. “Shrek the Musical,” produced by DreamWorks and Neal Street Productions, will stop by the Kentucky Center next week as part of Broadway Across America. It may not have the familiar voices of Mike Myers, Cameron Diaz or Eddie Murphy, but “Shrek the Musical” does feature several Broadway alumni such as Haven Burton (Princess Fiona) and Alan Mingo Jr. (Donkey), as well as contributions from Pulitzer Prize-winner David Lindsay-Abaire, who wrote the book and lyrics. The musical is based on a combination of the book by William Steig and the first film. —Brandi Terry

That old saying, “You can choose your friends, but you can’t choose your family,” isn’t true. Sometimes you luck out and friends become family, for however long it lasts. That’s the thinking behind Weber Gallery’s exhibit “Sisters and Brothers,” with work created by 25 pairs of artists (a local professional plus one with developmental disabilities). The National Endowment of the Arts thought the show concept was such a good idea, they gave the gallery an award grant. “Although the artist pairs have chosen their own themes,” says gallery director Carol Mueller, “the overarching exhibition theme is the innate sisterhood and brotherhood of humanity, as different as we may seem. The creations of the sister and brother artist pairs at once complement each other and assert their own independent individuality.” —Jo Anne Triplett

Early Kentucky silver and wood furniture are highly respected objects within the state and nationally. The Speed Art Museum is a great place to see both, especially with this installation that centers on silversmiths. “Silver in Kentucky, 1800-1860: Selections from a Private Collection” features more than 25 works. The best known early Kentucky silversmith is Asa Blanchard, who worked in Lexington in the early 19th century. Politician Henry Clay and Isaac Shelby, Kentucky’s first governor, owned some of his pieces. The exhibit features a Blanchard teapot with what may be the original cloth strainer bag accented with a silver collar. Of course, it wouldn’t be Kentucky without horse-racing memorabilia. A trophy from the 1846 Chiles Stake by another Lexington artist, George Stewart, is also featured. —Jo Anne Triplett