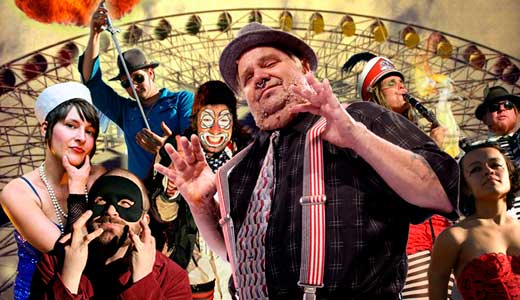 Shakespeare in the Park

If there’s anything in Louisville we’re not short on, other than humidity and allergies, it’s live Shakespeare — we’ve got Walden, Savage Rose, various high school, college and community theaters, and, of course, Kentucky Shakespeare, which is celebrating its 51st year of this free outdoor festival. If you’ve somehow never attended a single Shakespearean production and need some catching up, fear not — the festival kicks off with “The Complete Works of Wllm Shkspr (Abridged),” which hilariously crams all of the Bard’s comedies, tragedies, histories and sonnets into one cozy 90-minute romp. Following that, the festival will include two early comedies, “As You Like It” and “Two Gentlemen of Verona,” and they’ll wrap up with U of L Theatre’s production of “The Orphan of Chao” and the Louisville Youth Choir’s Alumni Concert Series. —Jane Mattingly

We live in an era where old things are often repurposed as new things for an audience with an oft-limited knowledge of history before the reality-TV era. Today’s teens probably don’t listen to much pre-WWII swing or Tin Pan Alley popular music, ignore buskers playing for lonely dollars, and are scared of gentlemen wearing bow ties. However, savvier lovers of music and dancing have had trouble ignoring retro-hip bands of recent years, from the Squirrel Nut Zippers to Pokey LaFarge and the South City Three. New York’s Two Man Gentlemen Band use only a guitar, a bass and charming matching vocals to create a sound that defies the listener to sit still. We hear their live show is a well-honed night of entertainment involving plenty of banter and audience interaction, so request new songs like “There’s Something in My Trousers” or “Me, I Get High on Reefer.” —Peter Berkowitz

Let’s look at the newest Cirque Du Soleil show, “Alegría,” by the numbers: more than 400 costume pieces; 55 performers from more than 15 countries; seven main characters; two and a half hours long; in Louisville for three nights. “Alegría” is a Cirque show of typical extravagant fashion — the performance features trapeze artists, fire-knife dances, contortionists and aerial high-bar performers, all driven by the show’s key theme of the grace and power of youth. The performances are set to a soundtrack of live singers and musicians. “Alegría” (Spanish for joy and jubilation) premiered in Montreal in 1994 and has been seen by more than 10 million people since. Its soundtrack is the best-selling Cirque Du Soleil album to date, surpassing even “LOVE,” the popular show based on music by The Beatles. —Brandi Terry

Bunbury Theatre closes out its 25th anniversary season with “The Foreigner,” an award-winning comedic play by the late Larry Shue. The play revolves around two characters at a fishing lodge in Georgia, one of whom is painfully shy. Assumed to be from a foreign country and unable to speak or understand English, the character ends up overhearing more than he bargained for. Shue was a rising actor and playwright before he was killed in a plane crash in 1985. In addition to “The Foreigner,” which won two Obie Awards and two Out Critics Circle Awards for Best New American Play and Best Off-Broadway Production, he also wrote his best-known work, “The Nerd.” —Kevin Gibson

There’s one less artwork in Interpol’s Stolen Art Database, the Art Loss Register and the National Stolen Art File. The Speed Art Museum recently discovered an altarpiece bought in 1973 for its permanent collection is stolen. “When the Speed purchased this altarpiece nearly 40 years ago, we did not know it had been stolen from a private collection,” says director Charles Venable. “Since being notified of this, we have worked closely with all parties to research the case and to restore (the) painting to its rightful owner.”

The altar painting, typical of small privately owned altarpieces, has been attributed to 14th-century artist Jacopo del Casentino. It was taken from the Villa La Giraffa in Goito, Italy, in 1971. It will be returned to the Department of Justice in early July, so check it out while there’s still time. —Jo Anne Triplett

To be a young band in Nashville these days means you are either trying to get on CMT or be championed by your new neighbor, famous rock star Jack White. Pujol is a much-buzzed-about young band of garage rockers led by its namesake, 20-ish Daniel Pujol, with a rotating cast of backing players. While the band has yet to drop its first album, their existence is impossible to ignore on the blogosphere and in bars in bigger cities. White said, “They’re really, really, highly energetic … It’s a wild abandon within them. I can see that it’s inside of those guys, and it’s just gonna keep snowballing. In three or four years from now, it’s just gonna get bigger, and bigger, and bigger.” So catch this sweaty fun now before you have to wait to see them at Coachella, where they will become Danny DeVito’s new favorite band. —Peter Berkowitz

There are some freaky people in this town, and it seems like they always converge at the Alley Theater. I know this, because I’m there all the time. This weekend’s “Carne Vale: A Farewell to the Flesh” is no different, and it just might be the freakiest thing to take the stage yet. Presented by locals Venomiss and Plethora Studio, the two-day event is part vintage circus, street carnival and art show. Along with the Va Va Vixens (burlesque), Darshwood the Conjurer (magic), Gypsy Love (poetry), and Selene and Helios (aerial acrobatics), the folks from 999EYES Freakshow will give you a taste of what it was like to witness a circus freakshow. Performers include The Lobster Girl, Elephant Man, Gentle Giant and Medusa’s China Doll. Enter at your own risk. The show is 18 and up. —Sara Havens

Louisville Festival of the Arts

Art comes in many forms: sculptures, photographs, paintings, jewelry, pottery. All of these forms will be on exhibit at the fourth annual Louisville Festival of the Arts at the Summit. The festival features more than 150 national and local artists, all of whom were selected by a panel of judges through an application process. The art for sale will range from $25 (for a pair of earrings) to $20,000 (for one-of-a-kind metal sculptures). If you’re not looking to spend quite that much, check out bracelets from Louisville native Michala Riggle, which will benefit her nonprofit group, Beading to Beat Autism. No pressure, though — the entire festival is free for viewing, with numerous works of art for exhibit only. —Brandi Terry

Fresh off of a humanitarian effort to help survivors of severe weather in storm-battered Alabama, the folks at O’Shea’s “Irish Care Committee” are at it again by donating 100 percent of Monday’s sales at Flanagan’s and O’Shea’s Irish Pub toward saving the Hogan’s Fountain Pavilion in Cherokee Park, which was recently named by Preservation Louisville as one of the city’s most endangered mid-century structures. The event is kid-friendly, and the marriage of philanthropy and Guinness consumption is decidedly too good to pass up, so grab a pint (or five) and help save a piece of Louisville history. —Jonathan Meador

It’s getting to be the time of year when those of us who aren’t hitting the beach will want to sit in the shade of a tree with a good book. Author Richard Horan looked into the role of trees in nurturing America’s literature, and he came up with a unique way to celebrate it: by seeking out the trees that inspired great writers. Horan’s ultimate goal was to collect seeds from storied trees and have his own literary arboretum, but along the way he had enough serendipitous adventures (skinny-dipping in Walden Pond?) and piquant observations to fill up a book. The author is coming to Carmichael’s next Wednesday to give a talk on “Seeds: One Man’s Serendipitous Journey to Find the Trees That Inspired Famous American Writers from Faulkner to Kerouac, Welty to Wharton,” which is just out in paperback. —T.E. Lyons

Primarily a landscape photographer, Connecticut artist Steve Sherman prefers to work in black and white and adheres to the traditional photographic process, because “real photographs are born wet,” he says. Whether it’s capturing a simple New England farmhouse or the New York City skyline, the self-taught photographer excels at clarity and indescribable depth by using large-format cameras. Part of his “Landscape Scene” exhibit at Paul Paletti Gallery highlights the “hand of man” on industrial and urban landscapes. “The mystery and the unknown, which may lie around the next corner, continue to fuel a passion that somehow has eclipsed 25-plus years in what seems like the blink of an eye,” he says. —Sara Havens

Koch and Company is a new art gallery in what Deborah Koch calls “the untapped neighborhood of Valley Station.” Owning a gallery full of work by 54 local artists is a dream come true for her. Sharon Matisoff is one of the artists currently on exhibition. “Since I am a figurative painter and I particularly enjoy painting creative people, I decided to paint a series on ballet dancers,” she says. “Also, because I practiced ballet as a child, I feel that I am able to appreciate the artistry and hard work that goes into the creation of a dancer … the Louisville Ballet graciously allowed me to watch them warm up and practice … they are lithe and sleek like jungle cats as they stretch their muscles before they practice their routines.” —Jo Anne Triplett