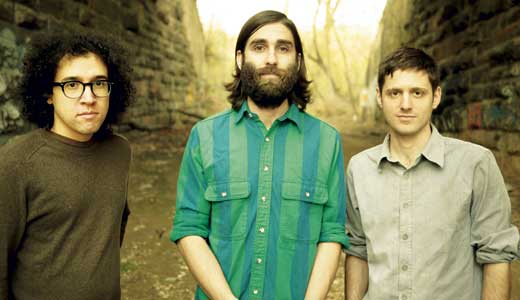 Small Sur is a folk-based band from Baltimore that plays slower than most. Their confident approach has earned solid reviews from fans all over, like the NPR staffer who wrote they create “strikingly peaceful folk that feels as if it’s sprung from the Pacific coasts of California rather than East Coast clubs.” Their label, Portland, Ore.’s Tender Loving Empire, describes their music as “Songs about trees, kelp.”
LEO spoke with singer/songwriter/guitarist Bob Keal before they left for a tour promoting their new album, Tones, which will be released on Tuesday.
“I write slow songs, because faster songs don’t come out of me,” Keal says. “For those who hang their hats on faster ones, that’s all well and good, but for me, there’s no such thing as ‘too slow.’”
Small Sur is a bit of an outcast in Baltimore, whose scene today is dominated by loud and art-damaged rock bands and experimental musicians. Keal, who was raised in South Dakota as “a pretty normal Midwestern kid,” has always followed his internal compass, moving as he pleases. His songwriting doesn’t always reflect his surroundings.
“I can’t really say that Baltimore itself has influenced my songwriting in any direct way since moving here almost six years ago. One song on Tones, ‘Prettyboy,’ was written about a reservoir that’s 30 minutes or so from the city, but beyond that, I’d say that I find much stronger inspiration from more rural environments, my youth in South Dakota, traveling in California or the Northeast, and spending time with friends.”
Keal, a man possessing a giant lumberjack beard, spends most of the year teaching elementary school. “I teach English to Students of Other Languages (ESOL). All my kids are amazing and interesting, and while they haven’t slipped into my songs just yet, I’m sure they will soon.”
He acknowledges that he thinks sometimes about moving to a different environment. “Baltimore has many different faces, and not all of them are pretty, but my music is just one part of my life. So, while I’m sure I’ll leave Baltimore sometime in the not-so-distant future, the move will likely have more to do with an overall change of lifestyle than anything to do with the band.
“In a way, too, it’s pretty inspiring to play music in a city that doesn’t traditionally embrace our brand of music, because we get to play and collaborate with tons of bands that we wouldn’t probably hook up with if we didn’t live here.”