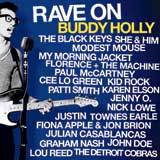 I hope that on the 75th anniversary of my birth, someone makes me something as perfect as Rave On Buddy Holly. I would probably be satisfied if someone just gives me Rave On Buddy Holly as is. This 19-song tribute has original tracks from a broad swath of popular musicians, including Patti Smith and Fiona Apple and Jon Brion. Some of them are daring and far ranging (who knew Cee-Lo could get so rockabilly?), and some play it safer (She & Him’s cover of “Oh Boy” is excellent but adorable in a thoroughly Holly-esque way). Local favorites My Morning Jacket do an expressive and personal cover of “True Love Ways.” Paul McCartney’s intense rendition of “It’s So Easy” is so good it’s unrecognizable from the things he’s been up to recently. Between contributions from the Black Keys, Julian Casablancas and Lou Reed, there’s something for every stripe of Buddy Holly lover. This is a great tribute to one of the greatest musicians. Legit, this is genius, except who fucking invited Kid Rock? Who did that?